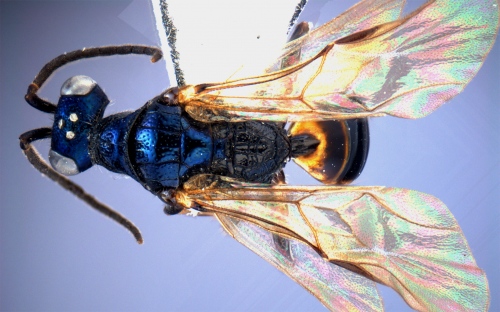 A new study provides seventeen records of the cuckoo wasp genus Cleptes from China, nine of which are beautifully coloured new to science species. The study, published in the open access journal ZooKeys, is the first revision of the genus from China, providing morphological data and illustrations.

Just like the cuckoo the wasps sneak in and lay their eggs in host nests. When hatched the larvae consume the host egg or larva, while they are still young, and after eliminating competition they move onto consuming the provisions. The members of the genus revised are parasitoids of the prepupae of sawflies.

Another interesting survival mechanism of the cuckoo wasps is their ability to curl into a protective ball when in danger, a process known as conglobation. In nature this mechanism is also seen in pill bugs and armadillos.

“Relatively thoroughly studied in Europe and North America, there are only a few and non-systematic studies for Asia. In China, the fauna of Cleptes is still very poorly known. This study is the first revision of the genus there, recognising seventeen species, nine of which are new to science, and marking the road for future studies.” comments Zai-fu Xu, South China Agricultural University.