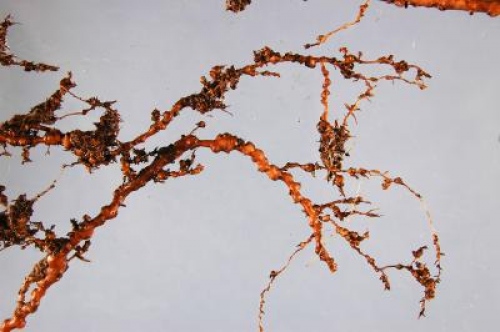 Following its recent synonymisation with Meloidogyne ulmi, a species known to parasitize elm trees in Europe, it has become clear that M. mali has been in the Netherlands for more than fifty years.

Evidences given by the authors suggest that M. mali was probably introduced during the breeding program on Elms against the Dutch Elm Disease (DED) during which large numbers of Elm rootstocks and seeds were imported from several different countries. The study was published in the open access journal ZooKeys.

M. ulmi, the synonym of M. mali, was first described in Italy on the Elm tree species Ulmus Chenmoui. According to this current article, it has also been associated with several other plant species from a survey conducted in the Netherlands. It causes severe galling symptoms on its host, thereby interfering with their water and nutrient uptake from the soil.

On the current distribution of Meloidogyne mali in Europe, the authors speculate it could be found in ten other European countries namely Belgium, England, France, Ireland, Italy, Spain, Denmark, Germany, Slovakia and Romania. These were the European countries to which resistant Elm rootstocks were sent at the end of the breeding program.

The first description of M. mali was in Japan and it dates back to 1969, with the type host being apple. Many studies later on associated this nematode species with several plant species including Elms. In Europe, however it was for years only known to parasitize Elms. The trial field, ”Mierenbos”, in Wageningen used for growing the resistant Elm cultivars is completely infested with M. mali, with all the trees showing severe galling symptoms.

During this study, M. mali was tested on some more plant species which were found to be hosts to this nematode species. The authors compounded a list of about 44 different plant species currently recognized as host to M. mali. It is highly probable that this root-knot nematode has even a wider host range than what is known now, and possibly a wider distribution in Europe than where it is currently confined to be (Italy and the Netherlands).