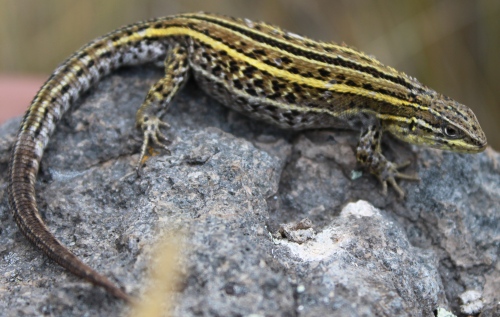 Three beautiful new lizards from the Andes of Peru have been delimited and discovered using different lines of evidences by Peruvian and American biologists from San Marcos and Brigham Young universities respectively. The study was published in the open access journal Zookeys.

These lizards have been “hidden” and confused with other lizards of the same group because of their overall similar appearance. However this study, which includes molecular, ecological and more detailed morphological analyses, has identified them as new species. This research can be seen as an example of a midpoint between, on one extreme, species delimitation studies which rely on expensive molecular data and rarely include descriptions of new species, and at the other extreme, species descriptions that rely on morphology and rarely include more than elementary analyses.

The new study shows that with few resources, multiple different lines of evidence can be integrated to discover new species and provide a basis for more stable scientific names. Species with scientific names are crucial because they become “visible” to national and international governments and organizations devoted to biodiversity conservation. Species delimited but not formally described and without scientific names don’t exist in the real world, and this is an issue of pivotal importance in the Andean, Patagonian, and Neotropical regions of South America.

The new species are named for and dedicated to two different old Andean civilizations, Chavín and Wari, and an Inca ruler, Pachacutec. Liolaemus pachacutec was found above Písac, an Inca ruin built by Pachacutec. Liolaemus chavin was found in an area close to the center of the Chavín culture, where reptiles and other animals were represented in some remarkable artistic expressions. Liolaemus wari was found close to the center of Wari culture, in Ayacucho department, southeastern Peru.