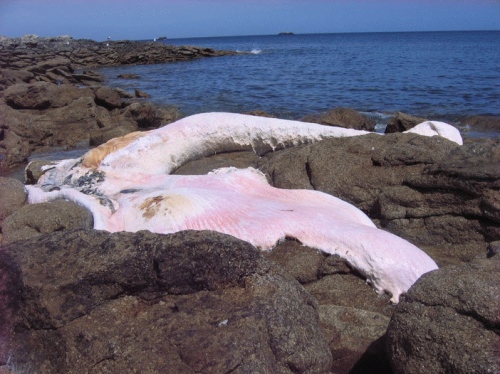 Marine mammals are flagship and charismatic species, very attractive for the general public. Nowadays, they are also considered as highly relevant sentinel of the marine realm. Their presence and their welfare in an area is thought to indicate the health of the place, whereas their disappearance, their displacement, or a decrease in their abundance or health could reflect negative environmental changes, whether of anthropogenic origin or not.

Researchers from Océanopolis and from the Laboratory BioGeMME (Biologie et Génétique des Mammifères Marins dans leur Environnement) of the University of Brest, in collaboration with the Parc naturel marin d’Iroise and PELAGIS, have evaluated the usefulness of DNA barcoding in the monitoring of marine mammal biodiversity. They confirmed the species identifications performed by field correspondents, identified degraded carcasses or parts of carcasses, and examined intraspecific genetic variations for the harbour porpoise and the grey seal, undetectable by visual observation.

The conclusions of their study, published in a special issue of the open access journal Zookeys dedicated to DNA barcoding (DNA barcoding: a practical tool for fundamental and applied biodiversity research), are that the use of DNA barcoding in conjunction with a stranding network will clearly increase the accuracy of the monitoring of marine mammal biodiversity. Global climate change, as well as more localized environmental changes (some of which are caused by humans), has impacts on the marine realm. A routine use of DNA barcoding to monitor marine mammal biodiversity will clearly increase our capacity to detect such impacts, which is a necessary first step to take appropriate conservation measures.

In Brittany (a region located at the northwest of France), the network is coordinated by Océanopolis in Brest. In this area, and all species included, an average of 150 animals strand each year, representing, in the last ten years, 14 species of cetaceans and five species of pinnipeds. These species include for instance, common and bottlenose dolphins, harbour porpoises, but also larger animals like minke whales and fin whales. Some rare stranding events include deep-diving or exotic species, such as arctic seals.