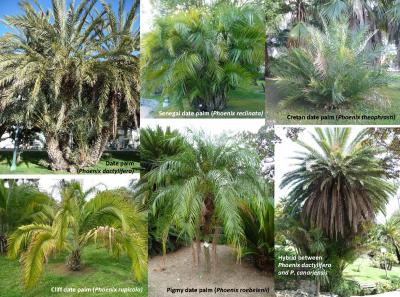 Reliable and cost-effective species recognition is the dream of many scientists, and has important applications. While the use of morphological features is often uncertain, and can lead to misidentification, species identification based on the composition of short DNA sequences -the so-called “DNA barcodes“- has proven to be the safest way to reach this goal, both in animals and in many groups of plants.

Palms belonging to the genus Phoenix, including the economically-important date palm Phoenix dactylifera, i.e. the main fruit crop in North Africa and the Middle East, are amongst the groups of flowering plants characterized by difficulties in species discrimination based on their look. Moreover, given their high interfertility, they can easily hybridize whereas they come into contact, generating even more confusion for palm scientists.

To overcome such an issue, an international team of scientists examined a small region of chloroplast DNA, looking for a potential “barcode” for this group of plants. By screening over 130 palm individuals from 13 out of the 14 species of the genus Phoenix, they found enough variation in the composition of the DNA, to be able to identify correctly eight species out of 13, and more than 82% of the individuals. The study was published in the open access journal ZooKeys.

”It’s a very encouraging result.”, said Marco Ballardini, a biologist at that time research assistant at the Consiglio per la Ricerca e la Sperimentazione in Agricoltura (CRA-FSO) in Sanremo, Italy, and first author of this study. ”Finding the appropriate DNA barcode for Phoenix palms has several practical applications, ranging from the conservation of endemic and/or endangered species, like the Canary Island date palm, or the Cretan date palm, to the identification of hybrids having an ornamental value.”

The identification of palm individuals at the species level, as well as the detection of hybrids, can also be very helpful for preserving the genetic characteristics. Consequently, as in the case of date palm, the fruit quality of cultivated stocks, is one of the most interesting returns of this kind of study.

”To achieve a 100% success in identifying Phoenix palms, we have to analyze a few more regions of DNA, especially in the case of closely related species. Moreover, as the chloroplast DNA is inherited only through the maternal lineage, DNA of paternal origin should also be taken into consideration, in order to detect all possible hybrids.”, concluded Ballardini.