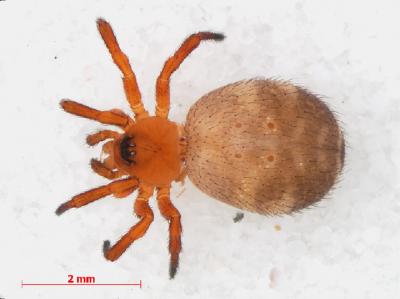 The ability to sequence the DNA of plants and animals has revolutionized many areas of biology, but the unstable character of DNA poses difficulties for sequencing specimens in museum collection over time. In an attempt to answer these issues, a recent study of 31 target spider species from the Naturalis Biodiversity Center in Leiden, discovers that both time and body size are significant factors in determining which specimens can produce DNA barcode sequences. The study was published in a special issue of the open access journal ZooKeys.

The specimens contained in the world’s natural history museums are the basis for most of what scientists know about biodiversity. Much like libraries, natural history museums are responsible for the long term preservation of their collections while circulating loans to active scientists. Museum curation techniques were developed over hundreds of years and optimized for anatomical preservation, and are often not ideal for preserving tissues for DNA sequencing.

DNA barcoding is an approach to the study of biodiversity that involves sequencing a standard region from the genome of an unidentified specimen and comparing it to a library of identified reference sequences representing many species. The success of this approach is in part dependent on the completeness of the library of reference sequences. When building such a reference library, specimens must either be freshly collected or taken from an existing collection.

The question addressed in this study is can we predict which specimens in a museum collection are likely to yield a successful DNA barcode sequence? If so, we can optimize our resources, wisely select museum specimens to sequence, and plan fresh collections to supplement. This study focused on Dutch spiders.

31 target species that have been frequently collected in the Netherlands over several decades and deposited in the Naturalis Biodiversity Center in Leiden were selected. For each target species, a series of increasingly older specimens was selected and brought to the lab for DNA sequencing. This was supplemented with freshly collected material representing nearly 150 Dutch spider species. The scientists recorded which specimens successfully produced DNA barcode sequences and which failed. They also experimented with DNA extraction techniques.

Typically, DNA extraction begins with the removal of muscle tissue; this is destructive extraction. An alternative approach is to soak the specimen in a solution that releases DNA from cells but does little or no damage to anatomy; this is nondestructive extraction. They found that failure rates for DNA barcode sequencing rise with time since collection, but body size is also a significant factor.

For freshly collected specimens overall, body size is not a predictor of sequencing success or failure. But larger species have a longer DNA barcoding shelf life than smaller species. Nondestructive extraction techniques can significantly improve the chances of obtaining a DNA barcode sequence. Considering only the commonly applied destructive extraction method, small spiders are useful for only a few years while those with a body length of around 3 mm or more have a good chance of yielding a barcode sequence for about 20 years after collection.

But using nondestructive extraction, even small spiders with a body length of 4 mm or less have a good chance of yielding a DNA barcode sequence for about 15 years after collection while spiders above this size can yield barcode sequences for a considerably longer time. The success of nondestructive extraction demonstrated here coupled with the need to preserve museum specimens for a variety of research purposes bodes well for museum collections are source material for DNA barcode libraries.