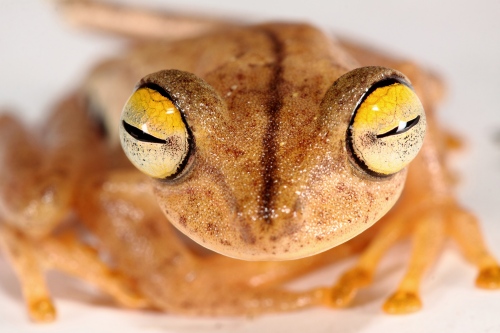 Amazonian biodiversity has been studied for hundreds of years. Early explorers of Amazonian plants and animals included renowned naturalists of the stature of Alexander von Humboldt and A. R. Wallace. Despite this long history of exploration, new studies are resulting in the discovery of a large number of new species. The key of these discoveries lies in the use of advanced new tools for species detection.

The study, published in the open access journal ZooKeys, found up to 11 species among populations of what were previously considered two widespread treefrog species. Based on analyses of the genetic variation of dozens of Amazonian populations across six countries, the team lead by Marcel Caminer from the Museum of Zoology at Catholic University of Ecuador, found unequivocal evidence of the existence of a large amount of the so called “cryptic diversity“. The genetic results were corroborated with detailed analyses of male calls and body shape and color. The study formally describes four of the new species identified.

”These findings could not be possible without large-scale genetic sampling.” said Dr Santiago Ron, one of the authors of the study. ”The genetic data allows the discovery of species that have been hidden in museum shelves for decades. Genetic screening is opening a new age of scientific discovery in biodiversity studies in the Amazon region.”

“Cryptic species” are two or more species mistakenly classified as a single one. Traditionally, taxonomists recognized species purely on morphological grounds and therefore failed to discriminate between species with similar appearance. The increasing use of DNA sequences for species recognition is demonstrating that current estimates vastly underestimate the true Amazonian species richness.

The discovery of cryptic diversity also has important implications for the conservation prospects of the species. ”What were considered two species with wide geographic distribution turned out to be eleven species with much smaller geographic ranges. This change implies that each species has a higher extinction probability.” said Dr. Ron. ”If our results are typical of Amazonian amphibians, a large scale reassessment of their conservation status and geographic distribution will be required.”