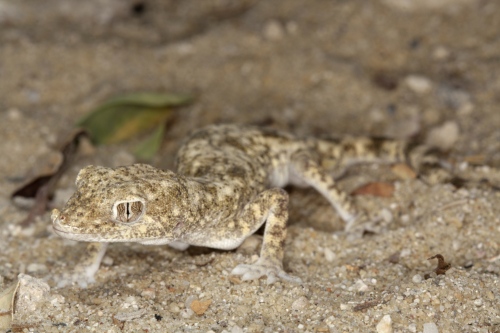 The state of Qatar occupies a small peninsula of 11,500 km2 within the Arabian Peninsula. Both Qatar’s population and economy have increased rapidly during the last decades, thus putting a strong pressure on native species. The commitment of the Qatari government towards sustainable development has triggered a variety of studies of its dwindling biodiversity.

A recent lizard inventory project has confirmed the occurrence of 21 lizard species, two of them being the first records to the fauna of Qatar, the Persian leaf-toed gecko and the Gulf sand gecko. The Qatari lizards belong to eight different families, but the most abundant family is Gekkonidae with nine species of nocturnal Geckos.

The authors of this study have found that while some lizard species are widespread, others are only present in few locations. In fact, lizard species richness varied between one and eleven species per grid square of 10×10 km. The most abundant lizard species are associated with artificial habitats made by human activities, and some of these are probably introduced. Other lizard species appear to be rare and would require urgent conservation measures. Despite the small size and flat relief of the country, some areas are not easily accessible and were under sampled. The study was published in the open access journal ZooKeys.

The authors believe that additional lizard species might be present. “Additional efforts and funds are needed for future field surveys including all protected areas and private farms in order to complete the inventory of lizards of Qatar.”, explains one of the authors Dr. Cogalniceanu. “The complete distribution database will be valuable to identify and plan adequate conservation measures for lizards. The data will also allow for species distribution modelling and predicting shifts in species range under different climate change scenarios and human impact factors.”

This study was possible thanks to the efforts and close collaboration of a large international team from Qatar (Ministry of Environment, Qatar Foundation and Qatar University) and several European institutions from Spain (University of Zaragoza, Aranzadi Society of Sciences, Forest Sciences Centre of Catalonia-CTFC, Spanish National Research Council-CSIC) and Romania (University Ovidius Constanţa).

Funding for this study include the Qatar Foundation (QEERI) Project #QF.00.307.722011.QE11, and funds from the Qatar Ministry of Environment and Qatar Petroleum, and from the Department of Education, Government of Navarra (Spain).