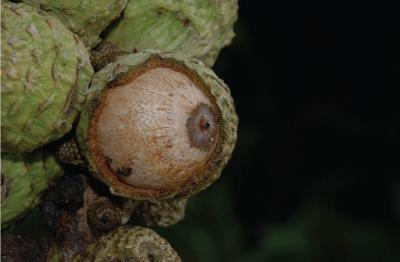 An international team of scientists from Xishuangbanna Tropical Botanical Garden (China) and the Forest Herbarium (BKF – Thailand) discovered a new species of Stone Oak in the Ton Pariwat Wildlife Sanctuary in Thailand. This isolated sanctuary is popular for its rich bird- and wildlife such as the Blue-banded Kingfisher and Whitehanded Gibbons, as well for its rare and beautiful flora like Rafflesia’s – known to hold some of the largest flowers on earth. The wildlife sanctuary covers a region of low-lying forested mountains and is located in the middle of a fascinating transition zone that lies between the northern Indochinese and the southern Sundaland biogeographic regions. A recent addition to the endemic species of this area is the newly described species of Stone Oak, currently known only from the sanctuary.

The new species Lithocarpus orbicarpus is a medium to small tree with simple leaves. It can be easily distinguished by its spherical acorns covered with a dense pattern of irregularly placed scales that completely conceal the nut, except for a tiny opening at the top, and which are arranged in dense clusters on upright spikes.

“This species is only known from Thailand, and has not been recorded outside Ton Pariwat Wildlife Sanctuary. During our field survey, we found only one individual tree, located on a gentle sloping section of closed dense forest.” explains one of the authors Dr. Strijk. “We know next to nothing about this species’ biology, it’s evolution or it’s position within the Oak family. Follow-up molecular work will provide us with more information, but additional survey work will have to be undertaken to determine the actual population size within the sanctuary. So far, it seems that the species is not only endemic but also very rare within the confined area where it appears.”

Such distribution limitation and rarity is not uncommon in tropical Oaks. Within this region alone, there are several species that are known only from one or two localities. Though not uncommon, such restricted ranges stress the possible delicate conservation status of new species and other flora and fauna present in the Ton Pariwat Wildlife Sanctuary. “The unique species composition, high diversity and relatively intact forest structure underscore the importance of strengthening ongoing and future conservation measures at Ton Pariwat Wildlife Sanctuary, as a key element of wider conservation efforts in southern Thailand.” adds Dr. Strijk.

Currently, more than 300 species of Stone Oak have been described, occurring from eastern India to Japan and the eastern tip of Papua New Guinea. The fieldwork and surveys in Ton Pariwat Wildlife Sanctuary by the team of Dutch and Thai botanists are part of ongoing research on the genomics, systematics, biogeography and evolution of tropical Asian Oaks and their close relatives.