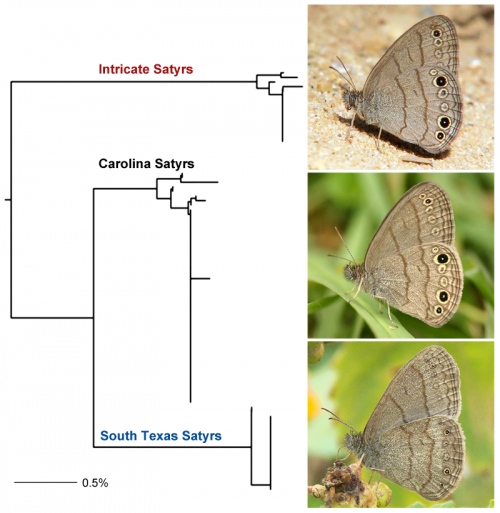 Butterflies are probably best-loved insects. As such, they are relatively well studied, especially in the United States. Eastern parts of the country are explored most thoroughly. First eastern US butterfly species were described by the father of modern taxonomy Carl Linnaeus himself, over 250 years ago. For the last two and a half centuries, naturalists have been cataloguing species diversity of eastern butterflies, and every nook and cranny has been searched. Some even say that we learned everything there is to know about taxonomy of these butterflies.

Discovery of a new eastern USA butterfly species is indeed very rare nowadays. It is even more remarkable that Texas researchers discovered not just one, but two new species at once. “It was completely unexpected.”, said Dr. Grishin. ”We were studying genetics of these butterflies and noticed something very odd. Butterflies looked indistinguishable, were flying together at the same place on the same day, but their DNA molecules were very different from each other. We thought there was some kind of mistake in our experiments.”

But there was no mistake. Segments of DNA sequences obtained from these butterflies, clustered in two groups. While wing patterns in the two groups were indeed very similar, inspection of genitalia revealed profound differences. Males and females from one cluster had larger and paler genitalia, and males and females from the other cluster possessed smaller and darker genitalia, among other numerous distinctions. It became clear that the researchers were dealing with two species, which were not even very closely related to each other, just very similar in wing patterns. The study was published in the open access journal ZooKeys.

One of these species is a well-known Carolina Satyr (Hermeuptychia sosybius), discovered two centuries ago, in 1793: a small brown butterfly, just over an inch in wingspan, with eyespots along the edge of wings. It is one of the most common eastern US butterflies and a usual denizen of shaded, wooded areas, hence the name. The other species was new. It was named “Intricate Satyr” (Hermeuptychia intricata) for ”the difficulty in recognizing this very distinct species and its intricate ventral wing patterns”, Cong & Grishin write. Initially discovered in Brazos Bend State Park in East Texas, Intricate Satyr is widely distributed all over eastern USA in several states, including Florida and South Carolina.

One discovery leads to another. Being curious about genetic makeup of these Satyrs, Cong & Grishin decided to investigate DNA sequences and genitalia of Satyr populations from South Texas. And it immediately paid off. These populations turned out to be another new species, named “South Texas Satyr” (Hermeuptychia hermybius). Interestingly, South Texas Satyr is a close relative of Carolina Satyr, but Intricate Satyr is rather distant from either of them.

This begs a question about how many more new species of eastern butterflies remain to be discovered and currently hide behind their colourful wings? Nobody really knows, but it is clear that nothing can be further from truth than a statement that there is not much new to be learned about North American butterflies.