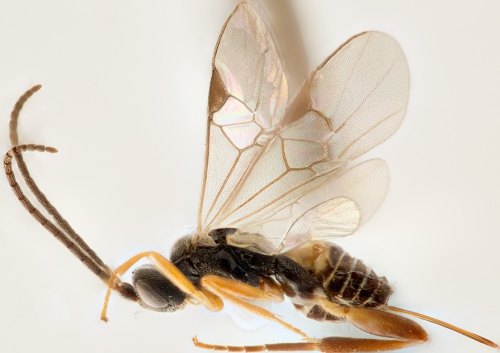 An inventory of wild-caught caterpillars, its food plants and parasitoids, has been going on for more than 34 years in Area de Conservación Guanacaste (ACG), a protected area of approximately 1200 km2 in northwestern Costa Rica. As a result, more than 10,000 species of moths and butterflies are estimated to live in ACG. Their caterpillars are in turn attacked by many parasitoid wasps, also numbering thousands of species. However, most of those wasps have never been described and remain unknown.

For the past few years researchers from Canada, Costa Rica and the United States have been studying intensively one of these groups of parasitoids: the Microgastrinae wasps – named that way because most of the species have a short abdomen. These small wasps (1-5 mm long) are one of the most common and diverse groups of parasitoids recovered from caterpillars anywhere.

The authors of this study, published in the open access journal ZooKeys, analysed more than 4,000 specimens of just one single genus of microgastrine parasitoid wasps from ACG: Apanteles, previously known from only three species in Costa Rica. The results are astonishing: 186 new species were found just in ACG. That is more diversity than all the species of Apanteles previously described from the New World. It also represents 20% the world fauna, in less than 0.001 % of the terrestrial area of the Planet!

“What this study shows is how much we have underestimated the actual diversity of parasitoid wasps, and how much we still have to learn about them.” said Dr. José Fernández-Triana, one of the authors of the paper. “When other areas of the planet are as well collected and studied as ACG has been, the number of new species of parasitoid wasps to be discovered will be mind-boggling.”

The study also found than most of the wasps species (90%) only parasitized one or just a few species of moths or butterflies, suggesting that the Microgastrinae parasitoid wasps are more specialized than previously suspected.

All the new species of ACG are described through an innovative approach that integrates morphological, molecular and biological data, computer-generated descriptions, and high-quality illustrations for every single species. The combination of techniques allowed the researchers to speed up the process of describing new species, without reducing the quality of the paper. Images of the cocoons that the wasps spin when emerging from the parasitized caterpillar were also included whenever possible, to encourage more studies on caterpillars and their parasitoids.

“We hope that this paper lays a foundation for similar studies on other tropical areas of the world.”, said Fernández-Triana. “In fact, most of the new species were named after the local persons (parataxonomists) in Costa Rica who actually collected the caterpillars in the field and reared the wasps used in this study. It is an excellent way to acknowledge and honor their valuable contribution, and we expect that in the future more citizens feel engaged to contribute to Science in similar ways.”