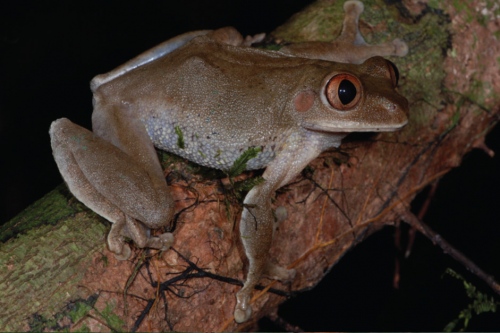 It is often difficult to decide whether two animals belong to the same or two distinct species. This can be especially challenging for animals which externally look very similar. In a recent study, published in the open access journal Zoosystematics and Evolution, scientists from the Museum für Naturkunde Berlin use genetic data and sound analysis to test if treefrogs from West and Central Africa belong to different or the same species.

Due to the fact that, when external characters are used, only size is useful to distinguish these frogs the scientists employed additional characters to determine species affiliations. One the one hand, they used genetics, and, on the other, advertisement calls of different populations. Male frogs have to attract their females via species specific calls, so call characteristics (e.g. duration, frequency) reliably tell whether animals belong to one or several species.

The two sets of populations have been previously declared as belonging to the same species based on morphological, meaning external, similarities. With their work the researchers from Berlin proved their expectations right, and revealing they were in fact working with four and not two species: two different sets of one large and one small specie, which live in West and Central Africa respectively.

In order to facilitate other researchers the verification of these results, not only genetic but also acoustic data are publicly available and the latter can be downloaded from the animal sound archive of the Museum für Naturkunde.

Species are the basis for all biological questions. Therefore, they are not only important for taxonomists but also a reference parameter for physiologists, ecologists or conservationists. Thus it is of central importance to be able to distinguish whether animals of two different populations belong to one or two distinct species. A clear showcase is an example, which was examined in a recent publication by zoologist from Berlin and Geneva.

“A colleague grouped animals to two species which were formerly known as four species, each now with a distribution across West and Central Africa. However, this contradicted known zoogeographical facts which found that forest frogs live either in West or in Central Africa but very rarely simultaneously in both regions. The clarification of that question is for example important to understand how the landscapes in these regions have developed over the past millions of years.” explains Dr. Rödel, one of the authors if the recent study.