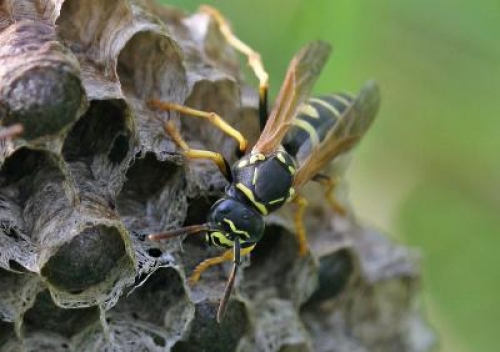 Swiss scientists have discovered a new species of aculeate wasp, not hidden somewhere in a jungle on a remote continent, but in Central Europe, in a swampy area just a few kilometers from Zurich. The new species named “Polistes helveticus“, or the Swiss paper wasp, was described in the open access journal ZooKeys.

Paradoxically, this species has been long known in Central Europe but was confused for decades with a closely related species native to southern Europe. Only after the latter expanded its range to northern Switzerland, possibly following climate change, was the confusion noticed.

Six years ago, the Swiss entomologist Rainer Neumeyer discovered a population of paper wasps in wetlands close to Zurich. He thought that he had found P. bischoffi, a well-known species in Switzerland. But at the same location he found another species which, although quite similar to the first, was unusual and could not be identified with certainty.

Neumeyer contacted scientists Gaston-Denis Guex from the University of Zurich, Hannes Baur from the Natural History Museum of Bern, and Christophe Praz from the University of Neuchatel. Together, the scientists used genetic and morphometric analyses to confirm the coexistence of two distinct species at the locality close to Zurich: a northern taxon, already well known from Central Europe, and a little known taxon mostly distributed in southern Europe.

After reviewing the information on the type material, the scientists came to the conclusion that the southern species was P. bischoffi, described 80 years ago from Sardinia. The northern species was given the name P. helveticus.

The southern species was not present in northern Switzerland until recently. The confusion was only revealed after P. bischoffi expanded its distribution northwards, possibly following climate change.