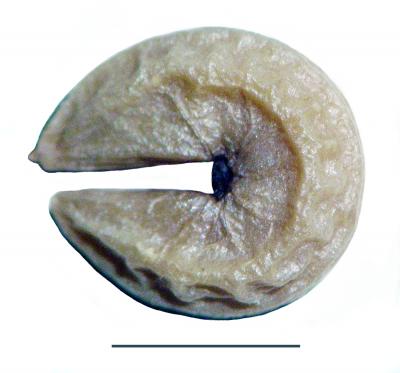 Researchers from the Missouri Botanical Garden have discovered in dry forests and transient sand dunes in Bolivia and Paraguay, a new plant species in the moonseed family Menispermaceae. The discovery was reported in the open access journal PhytoKeys.

The new species was described in the genus Cissampelos, which includes vining species that for the most part are found in disturbed habitats of the tropical and subtropical regions of the World.

This new Cissampelos is morphologically unique by its small leaves, its 8 anther-cells in the male flowers, and a large endocarp–a bony tissue surrounding the curved seed–obscurely ornamented.

The new species bears the name arenicola alluding to its preference for sand dune and dry forest habitats. Interestingly, the new species is superficially similar in habit to C. capensis a southern African taxon that also found in dry habitats.

As typical of most members of the Menispermaceae family, plants in the genus Cissampelos are also dioecious, with their male and female, mostly inconspicuous flowers found in different individuals.

The study by Dr. Rosa Ortiz and Dr. Michael Nee notes that the dioecious condition and increasing land transformation of its transient habitat may make this newly described species potentially vulnerable to extinction.