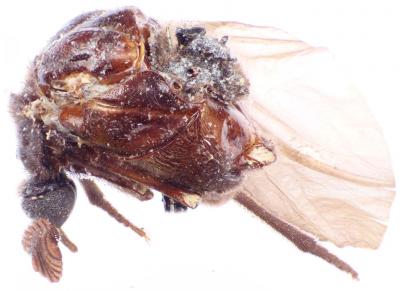 Serendipity leads University of Kansas scientists to the discovery and description of Rhipidocyrtus muiri – a 107 year old, lost in collections specimen, which turned out to represent a new genus and species. The long and tortuous history of the enigmatic ripidiine wedge beetle from Borneo is discussed in a recent paper published in the open access journal ZooKeys.

The holotype male, and only known specimen of Rhipidocyrtus muiri, was collected 107 years ago in Borneo but subsequent to this it was transferred among several researchers in the early 1900s. The specimen was dissected and many portions slide mounted, but these were disassociated from the pinned body for more than a generation to be finally put together by chance in 2011 and described as a new genus and species 3 years after.

Taxa within the ripiphorid tribe Ripidiini are both evolutionarily fascinating and woefully under-described. All members whose biology is known are internal parasitoids of roaches as larvae, a lifestyle likely established at least 90 million years ago resulting in highly derived yet incredibly stable morphologies.

“While the tribe has been widely discussed recently, only a handful of extant species have been named in the last half century, leaving the true evolutionary breadth and depth of the clade poorly understood.” comments the lead author Zachary H. Falin, University of Kansas Biodiversity Institute.

“The historical aspect of the type specimen itself and how it came to be described is indeed rather remarkable and deserves mention, if only to highlight the role of serendipity (and proper specimen curation) in systematics,” he adds about the unusual circumstances of the discovery.

The crux of the story takes place in the Casey Room of the Smithsonian in January, 2011, though it begins with Frederick Muir’s travels in Borneo in the summer of 1907.

“Muir, a quintessential field entomologist, traveled extensively in the Pacific region in the first quarter of the 20th Century. Reading accounts of his travels invokes an intense sense of wonder, adventure and nostalgia in all but the most jaded naturalists.” explains Falin.

One of his epic adventures was a 38-month expedition (July, 1906 – Sept., 1909) in search of sugarcane borer biological control agents. This outing led him back and forth from China to Macau, Hong Kong, Singapore and the current nations of Malaysia, Indonesia, and Papua New Guinea, the expedition finally ending in Australia to recover from typhoid fever.

Indeed, it was in the midst of his 1906–1909 expedition, during a six week visit to the island of Borneo (July to September 1907), that Muir collected the specimen that is now recognized as Rhipidocyrtus muiri. Muir apparently deduced the creature’s parasitic nature and had it sent to William D. Pierce (1881–1967) at the USDA office in Washington, DC.

A terse handwritten note associated with the specimen provides the barest of insights as to its early history while simultaneously revealing Muir’s great interest in it: “This was left with Pierce and after his [Pierce’s] leaving [~1918] Muir visited USNM [~1918] and got [E.A.] Schwarz to find it. Then in 1928 Muir again visited us and called attention of H.S.B. [Herbert S. Barber] [to the specimen] but [Muir] declined to take it back.”

At some point the pinned specimen and its associated slides, vital for its taxonomic recognition, became separated. The pinned specimen travelled from Washington, DC to Kansas via Illinois while the slides remained “hidden” in a different section of the Smithsonian’s vast collection.

It was only a happenstance encounter that led to the rediscovery and reassociation of the body and slide-mounted abdomen and other sclerites in 2011, and to its eventual description. It has taken yet another three years to come to fruition, but Muir’s taxon, so deserving of a name, will finally receive one here, three institutions, at least five systematists, and approximately 107 years after its collection in the mountains of Borneo.