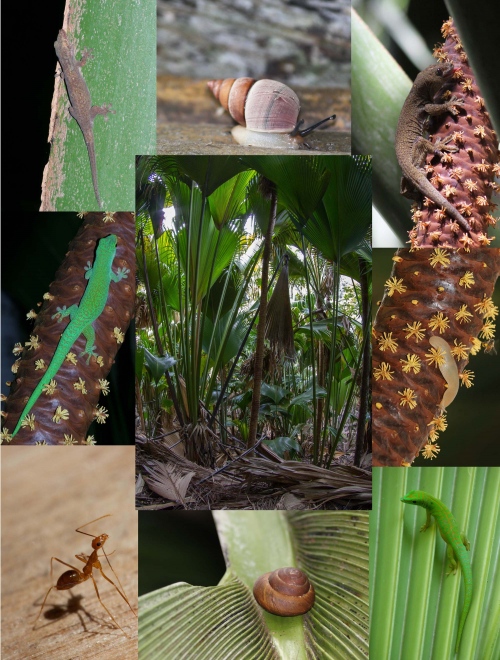 The yellow crazy ant Anoplolepis gracilipes is ranked amongst the top 100 worst global invasive species and is responsible for catastrophic ecological impacts on islands. A new study published in the open access journal NeoBiota examines and assesses the effects and dangers of the introduction of the yellow crazy ant to the unique,endemic ecosystem of the mature palm forest of the Vallée de Mai, a UNESCO World Heritage Site, on the Seychelles.

Impacts of invasive ants can include direct effects such as displaced local species, and indirect effects on key ecological functions such as frugivory, pollination and seed dispersal.

“Although the impacts and ecology of A. gracilipes have been well documented in degraded habitats in the Seychelles, little is known about this ant’s invasion potential in endemic palm forest ecosystems. Praslin, the second largest granitic island of the archipelago, is home to Seychelles’ native mature palm forest. This habitat represents one of the last island palm forest ecosystems in the world and hosts many species that are endemic to Praslin or the Seychelles,” explains Dr. Christopher Kaiser-Bunbury, TU Darmstadt, Germany.

According to the new study in the palm forest Anoplolepis gracilipes was confined to the north-east of the Vallée de Mai and remained almost stationary between April 2010 and December 2012, with isolated outbreaks into the forest. Infested areas typically had significantly higher temperature and humidity and lower canopy cover.

“Once an invasive species is established it is often difficult to eliminate or prevent further spread. In the case of A. gracilipes in the Vallée de Mai, further research into control or exclusion options, impacts and potential biotic resistance to ant invasion are required in addition to continued monitoring of distribution and abundance,” explains Dr. Kaiser-Bunbury.

Chemical control poses a considerable risk to non-target species, such as endemic ants. The study therefore advises promoting and researching resistance of the palm forest by creating and maintaining conditions which restrict A. gracilipes populations, such as the removal of introduced broadleaf trees which host high numbers of introduced hemipterans, and targeted control of ant nests in the most disturbed habitats.

Future research should experimentally assess and quantify parameters that ensure the resistance of the unique Vallée de Mai palm forest and its co-evolved plant and animal species.