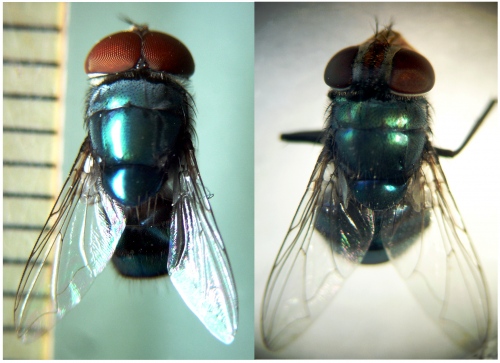 Non-biting blow fly Chrysomya megacephala is commonly found in dead bodies and is used in forensic investigations to determine the time of death, referred to as the post mortem interval. A report of synanthropic derived form of C. megacephala from Tamil Nadu is provided for the first time based on morphological features and molecular characterization through generation of DNA barcoding. This study, significant in forensic investigations was published in the open access Biodiversity Data Journal.

Chrysomya megacephala is commonly found in corpse in many parts of the world. It is a tremendously abundant species and is used as fish bait in northern and south-west India. It is known to breed in human faeces, decomposed meat and fish as well as in discarded organic materials.

This dipteran fly, therefore, serves as a potential vector of many diseases due to its close association with human dwellings. In general, C. megacephala is considered important in medical, veterinary and forensic sciences. Post mortem interval (PMI) determination is useful in cases of homicide, suicide and accidental or unattended death because of natural causes. An important aspect of calculating the PMI is the accurate and quick identification of the dipteran fly collected from a crime scene.

Behaviour and developmental times of dipteran flies are essential in determining the PMI. Currently, the most common way is to identify dipteran flies for examining the adult stage under a compound microscope. It requires that the larvae collected from a crime scene should be reared until development is complete. The dipteran fly can be identified in the larval form, but if the critical characteristics are small or vary ever so slightly, misidentification is possible.

In this context, a report for the first time for C. megacephala (sdf) from Royapuram fishing harbour, Chennai, Tamil Nadu, South East India is significant. A colony of C. megacephala was established from numerous second and third instar larvae collected from decaying fishes. The life expectancy of this fly is 40-45 days. Freshly emerged adults from pupae were identified through morphological and molecular studies.