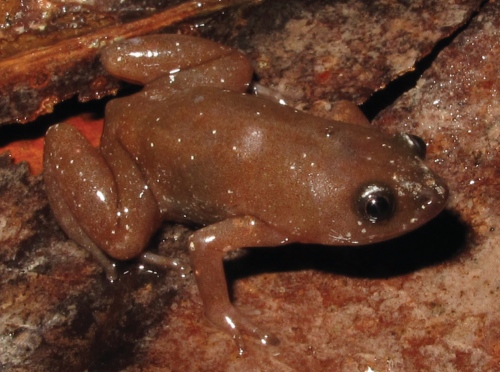 The Atlantic Forest is a hotspot of biodiversity and one of the most species richness biome of anurans (frogs, tree-frogs, and toads) in the world. However, current levels of diversity might be still underestimated. In the past few years has been an increase in the description of new endemic species of this biome along with the advance of molecular techniques and availability of samples for DNA analysis.

Using a more extensive number of samples for molecular and morphological analysis, researchers from the University of Richmond and The George Washington University described a tiny new species of narrow-mouthed frog from the Microhylidae family in the open access journal ZooKeys.

The specific epithet “quilombola” used for the species’ name refers to the people who inhabited these communities – slaves who dared to escape during colonial times and find a refuge in the depths of the Atlantic Forest.

Quilombos were used as a refuge for escaped slaves during colonial Portuguese rule in Brazil between 1530 and 1815. Nowadays in the north of Espírito Santo State quilombola communities still remain and maintain alive their traditions, such as quilombola food and craftwork.

“We were puzzling by the morphological variation of those frogs, which is little, but after the first results of the molecular phylogenies was clear the higher genetic disparity among them.”, say João Tonini, Ph. D. student at The George Washington University. Chiasmocleis quilombola occupy coastal areas north of Espírito Santo State, a region that is under strong human pressure, therefore the species may face imminent threat of habitat loss.