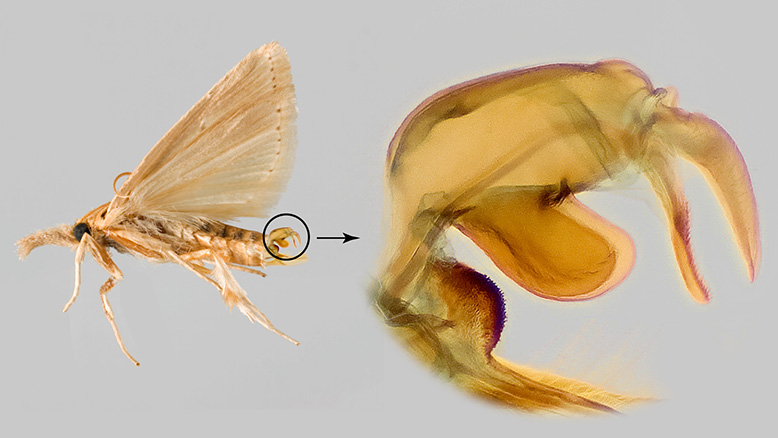 Two scientists have produced an illustrated key to define the subtle differences between the 41 species of snout moth grass borers that currently dwell in the Western Hemisphere. The researchers conclude that the adults moths are too tough to tell apart by external characters, and therefore, the only way to identify the species is by dissecting and comparing genitalia. The study is published in the open-access journal ZooKeys.

The caterpillars of this group of snout moth grass borers feed on crops such as sugarcane, corn, rice, sorghum, and on native grasses throughout the Western Hemisphere, which makes many of the species quite harmful pests.

“The caterpillars of snout moth borers are economically important worldwide as pests of planted crops used for food or biofuel, so their identity is important for their control,” says Dr. Solis. “A key with images provides a simple way to identify adult moths, especially those that cannot be distinguished easily. A key to their identification is one of the most important results of taxonomic research.”

This research required locating ‘type specimens’ or original individuals that were used to describe the species in museums, borrowing them and preparing them for studies while avoiding inflicting any damage, so that they can be used by future researchers. These special specimens are the “standard bearer” for the scientific name and solidify the morphological as well as the molecular identity of a species.

Furthermore, Dr. Solis explained that it is not only important to be able to recognize if a species is new to science, as she and her colleagues recently discovered with a species feeding on Eastern gamagrass in the United States. It is also crucial for tying a species’ scientific name to its biology or genetic composition.

The biology of many moth species is still a mystery, but a recent study, where Dr. Solis participated, identified and studied the biology of some of the species. It showed that there may have been two introductions of the sugarcane borer moth species to southeastern United States and it is likely that there is a species which is currently ‘hidden’ under the same name. She concluded that there is still much left to discover about these moth species from the Western Hemisphere.