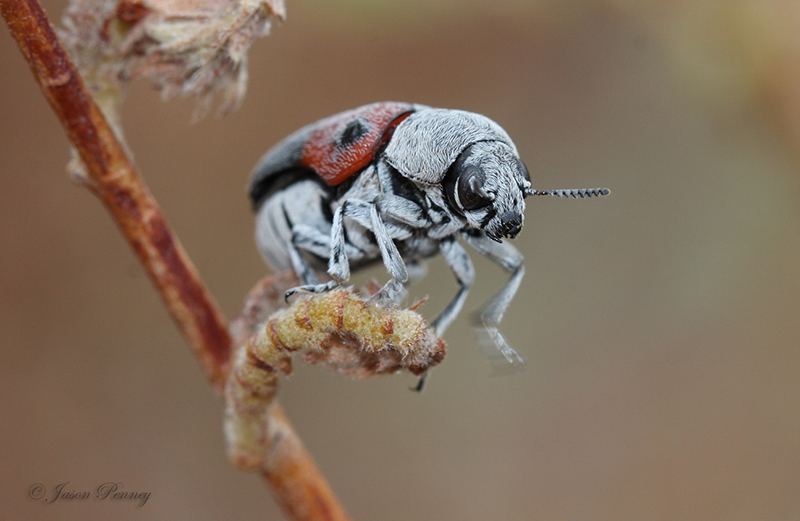 While the adults hide their heads inside their torso, like a cloaked, mysterious figure, their eggs stay hidden inside a case, carefully constructed by their mothers, using fecal pellets. Having already hatched, the larvae and, later, the pupae keep this initial case and build on forming a protective ‘fortress’ that their enemies can mistake for a plant twig or caterpillar frass.

A study published in ZooKeys, led by Dr. Federico Agrain, an Argentinian researcher of CONICET, and his colleagues in the USA and Germany, has unveiled some remarkable new patterns in the secretive life of a specific group within the leaf beetle genus that live within ant nests.

Their research highlights that these myrmecophilic (literally, ‘ant-loving’) leaf beetles live mainly among species of the ant families Formicinae and Myrmecinae.

“Living with ants might offer these beetles multiple advantages, and it might have aided the colonization of xeric environments,” hypothesised Dr. Agrain.

“Ants are notoriously territorial and aggressive, sniffing out and killing enemies that try to enter the ant nests. We suspect that these beetles sneak inside the ant nests by mimicking the scent and behavioral profiles of the ants,” suggests Dr. Caroline Chaboo, a leaf beetle expert at the University of Kansas and co-author of the paper. “How else could the beetles get the ants to pick them up outside the nest and take them into the nest where they can live undetected and with an endless food supply?”

These hypotheses need to be tested in future research. In addition to these novel aspects and hypotheses. “Specialized natural enemies, especially parasitoid Hymenoptera (the insect order where ants belong), exploit cryptocephaline beetles inside the ant nests,” says Dr. Matthew Buffington, a research entomologist at the ARS-Systematic Entomology Laboratory in Washington DC, and co-author of the present study.

Key evolutionary steps, needed to be taken by these leaf beetles, so that they are able to form an association with ants, are also discussed by Dr Federico Agrain and his colleagues. How does a leaf beetle find a host ant, enter the nest, survive within the nest, and, later, exit the ant nest? How strong is the strength of the host association? What are the benefits for the host? What about the diet specialization of adult and larvae? These are the sort of questions the scientists ask themselves.

Clearly, there is a wide range of new hypotheses to be investigated and inter-disciplinary approaches will be needed to unravel the secrets to myrmecophily and the covert, enigmatic lives of case-bearer beetles.