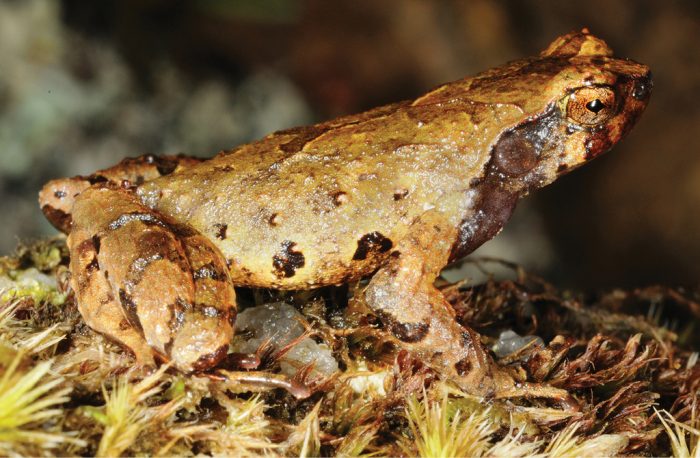 Deep in the foggy, moss-covered forests of Southern Vietnam, herpetologists uncovered one of the smallest species of horned mountain toads.

The name of the new amphibian (Ophryophryne elfina) derives from European mythology and translates to “elfish eyebrow toad”. Despite being recently discovered, the new species is already considered to be endangered. Having remained hidden in the highlands of Langbian Plateau, it is now described in the open access journal ZooKeys.

The unique species name “elfina” derives from the English word “elf”. In German and Celtic folklore, elves are described as small, supernatural creatures usually dwelling deep in the forests of magical hills. The frogs were named after them primarily because of their small size of around 3 cm, which makes them the smallest known species of the genus – as well as their fascinating appearance – they have small horn-like projections above their eyes.

The unique habitat of the amphibians also inspired their species name. The Elfin mountain toad lives in the highland wet subtropical evergreen forest. There it can only be found on mountain summits higher than 1800 m, or on the slopes of the eastern side of Langbian Plateau, where the rainfall is high because of the sea nearby. Both the rocks and the dwarf curbed trees are covered with a heavy layer of moss, whilst a thick misty fog is constantly lingering amongst the trees. This is why such wet mountain ecosystems are known as elfin forests.

Trending
48 years of Australian collecting trips in one data package

The Elfin mountain toad is one of the three known species in the genus Ophryophryne that inhabit Langbian Plateau. Curiously, all three of them share the same habitat, but can be easily distinguished by their advertisement calls resembling whistling birds.