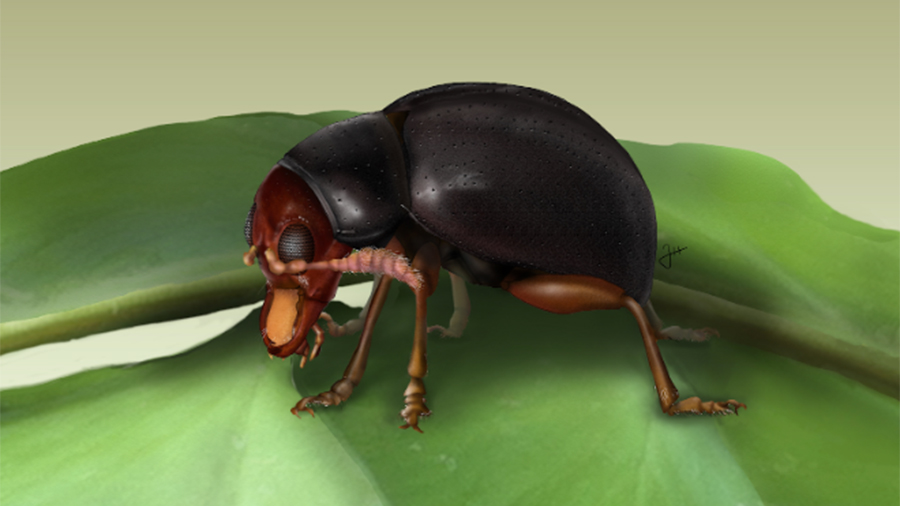 The fascinating and highly efficient jumping mechanism in flea beetles is described in a new research article in the open-access journal Zookeys. Despite having been known since 1929, the explosive jump – which is also the reason behind the colloquial name of this group of leaf beetles – has so far not been fully understood.

By joining forces, a team of Chinese and US scientists, led by Dr Xingke Yang, Siqin Ge and Yongying Ruan of the Chinese Academy of Sciences and Dr Alexander Konstantinov of the Agricultural Research Service at the U.S. Department of Agriculture, tested the existing theories, using micro-computed tomography (micro-CT scans), 3D reconstructions, high-speed filming and dissection. Following their experiments, the scientists provided comprehensive insights into the mechanics behind the spectacular jump in flea beetles and reported, for the first time, the role of a structure found in the legs of these insects, known as “elastic plate”.

The flea beetles (members of the tribe Alticini) are plant feeders that belong to a hyperdiverse group of about 9,900 species and occur in various environments worldwide: from lowland tropical rain forests to high-altitude mountain meadows and deserts. Most of them live, feed and procreate on the upper leaf surface of their host plants, thus making them particularly vulnerable to predators, including birds, ants and spiders. One of their defence mechanisms is their incredible jumping skills, which allow the beetles to escape an approaching predator in an instant.

The apparatus responsible for this exceptional jump is hidden inside the beetle’s hind legs and is relatively simple. It contains only three sclerotised parts and a few muscles. Yet, it is, in reality, a highly efficient “catapult”, able to propel the beetle at a distance hundreds of times its body length. Using micro-computed tomography, 3D reconstructions and high-speed filming data, the scientists revealed that the acceleration during the jump can reach an explosive peak of 8,650 m/s2, which is 865 times the acceleration of gravity. The peak power output of the hind legs of the beetle peaked at 2.24 × 105 W/kg (per unit mass). This is about 450 times the capabilities of the fastest known muscle and 100~200 times that of a powerful rally car engine.

The 3D reconstructions revealed two processes inside the hind leg that amplify the power output of the beetle’s muscles and reduce energy waste.

Firstly, the tibial extensor and tibial flexor muscles contract simultaneously and cumulatively build up elastic strain energy inside the femur (the longest segment of an insect’s leg). The energy is stored in a sclerotised structure, called a metafemoral spring, while another two structures inside the leg, previously known as “triangular plate” and “elastic plate”, act together as a trigger for the catapult mechanism. When the trigger is released, the metafemoral spring contracts and converts elastic potential energy into kinetic energy, which allows the flea beetle to attain an extraordinarily high acceleration. Instead of gradual acceleration throughout the jump, the flea beetle employs a ‘high-efficiency mechanism’ at the start, in order to store colossal strain energy to be released later on.

Thus, flea beetles avoid muscle fatigue (energy waste) and improve their jumping performance to the point where they can do over 30 consecutive jumps, as recorded by the scientists in their laboratory experiments. In nature, this mechanism is an adaptation for the insects to escape predators by quickly disappearing from the leaf surfaces where they normally spend their lives. In fact, it is this “explosive” jump that, according to the researchers, is amongst the key traits responsible for the high evolutionary success and remarkable species diversity in flea beetles.

In conclusion, the scientists note that the catapulting jump mechanism in flea beetles is so efficient and yet so simple that it might find an excellent use in robotics, as well as in engineering and industrial installations. In their research paper, they also propose a design of a bionic limb inspired by the studied beetles.