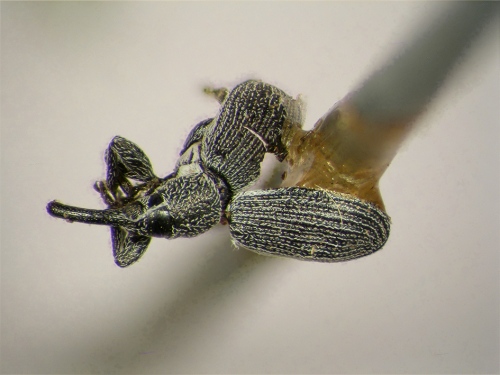 The new weevil genus was discovered during a routine study of some weevil specimens collected by the Swedish botanist and entomologist Carl Peter Thunberg, a disciple of Carl Linnaeus, during his trips in the then Cape Colony of the Dutch East India Company (now Cape Town, South Africa). The study revealed one tiny specimen measuring barely 1.8mm belonging to an hitherto unknown genus. This specimen was collected between 16 April 1772 and 2 March 1775 or when Thunberg returned from Batavia (now Jakarta, Indonesia) in 1778.

Dr. Miguel A. Alonso-Zarazaga, a weevil specialist at the Museo Nacional de Ciencias Naturales (CSIC), Madrid, Spain wanted to do a modern study of the species described by Thunberg with the specimens he collected, and particularly this one, which has not been found again since its discovery and description in 1813, after Thunberg’s return to Sweden. His results have been published in the open access journal ZooKeys.

The description of the new genus Thunbergapion has allowed other colleagues to identify just a few specimens in other collections that could also belong in the same genus, all from South Africa. ”Now the interest lies in finding populations of these species in the field that can be studied to discover their biology and host plants.”, said Dr. Alonso-Zarazaga, ” Their close relatives living in the Mediterranean region use species of Saint John’s wort as host plants for adults and larvae. These are also present in South Africa, but other plants cannot be ruled out.”

The species of this recently discovered genus could be relict, a term meaning that their populations now cover a small geographic area (in this case in South Africa) but in the past were more widely distributed. It is interesting to see the relationship with Mediterranean species, a link already established for some other groups of animals. But in South Africa the natural vegetation has been strongly altered by man, introducing new plants or modifying large extensions of land for agricultural use, not to mention the urban growth.

”This discovery comes to us from the past.”, said Dr. Alonso-Zarazaga, “Thanks to the good management of old collections like that of Thunberg in Uppsala, we can have a glimpse into the fauna that existed in South Africa in the end of the 18th century and that, perhaps in some cases, could have disappeared. That is why it is important to keep Natural History museums, collecting and keeping samples of the past and present faunas for the future generations. More than 200-year-old, this discovery has enriched the South African biodiversity because the Museum of Evolution of the Uppsala University has played the role in which society cast it.”