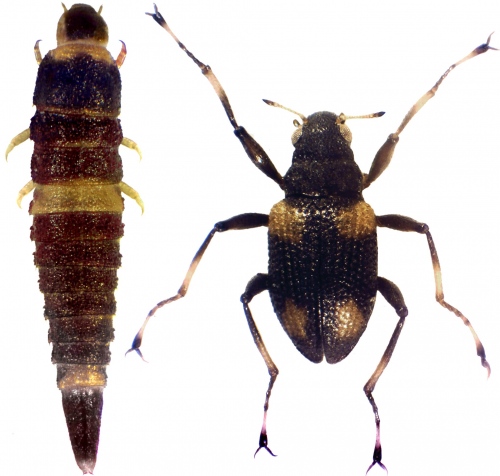 For biologists it is an easy matter: spiders have eight legs and insects have six. This fact is important when beholding and recognizing the tiny new species of Spider Water Beetles from the Philippine Island of Mindoro discovered by researchers of the Ateneo de Manila University. Zookeys, an open access international scientific journal launched to accelerate biodiversity research, has published the paper about the curious creatures in its latest issue [Zookeys 321: 35–64 (2013)].

Primarily, the study was intended to find and describe the larvae of known species of the genus Ancyronyx, under which all Spider Water Beetles of the world are compiled. But when the researchers checked the pristine creeks and rivers of the ethnic Buhid’s ancestral lands in the Municipality of Roxas, Oriental Mindoro, they found the first new species, now named as Ancyronyx buhid.

The second new species was detected among older collections of undetermined museum specimens. It was confirmed to occur in the waters of the famous Tamaraw Falls, a popular tourist destination in Puerto Galera, Oriental Mindoro. It was named Ancyronyx tamaraw after it’s “type locality”*.

The newly discovered Buhid Spider Water Beetle has high potential to be used as a bioindicator species for healthy ecosystem conditions, since it fulfills the necessary criteria: (1) it is surprisingly common in clean, pristine running waters all over Mindoro, but (2) it is absent in more or less polluted and altered streams and (3) it can easily be identified in larval and adult stages, by eye-catching color patterns.

The assignment of the immature larvae with the adult beetles was done by DNA tests since the genetic constitution is very similar in individuals of the same species irrespective of the developmental stage, but more varying between different species. The genetic data were deposited at gene bank, and the occurrence data of the Ancyronyx species of Mindoro were submitted to GBIF, the Global Biodiversity Information Facility. Both are curated free access databases.

20 species of Spider Water Beetles are known on earth by now. 11 of them are endemic to the Philippines and cannot be found anywhere else, indicating that the country is the diversity centre of this genus. It emphasizes the importance of the country as a biodiversity hotspot at global scale. More efforts are required to protect the ecosystems and their unique diversity of life forms.

* zoological “type specimens” are important vouchers of a taxon (e.g. a new species). They are deposited in scientific collections for safe custody as required by the International Commission on Zoological Nomenclature. The original place of collection of the primary type specimen is the “type locality”.

The study was partly funded by the Philippine Commission on Higher Education (CHED) as part of the PHERnet program and by the Ateneo de Manila University. A fund for free access publication was provided by Encyclopedia of Life (EOL) Open Access Support Project (EOASP). Ateneo researchers are also very thankful to the people and administration of San Vicente, Roxas, who most supported the study as well as for the international cooperation with other institutions, especially the Natural History Museum of Vienna, Austria and the Senckenberg Natural History Collections Dresden, Germany from where additional specimens were made accessible for this study.