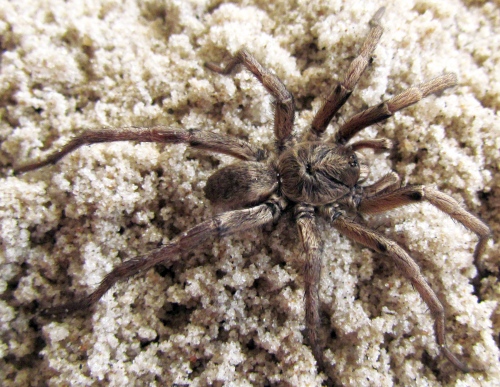 The two new species described from Uruguay, Chaco castanea and Chaco costai, are middle sized spiders that range between 1 and 2 cm in body size. Like all Nemesiids they have elongated body and robust legs with predominantly black-brownish coloration. A recent study in the open access journal Zookeys provides a detailed description of the two news species and a rare glimpse into their living habits.

The two new species are typically found in sandy soils of oceanic and river coastal areas associated with psammophyte, or sand-dwelling, vegetation. This is where these peculiar spiders build their silk-lined burrow where they spend great deal of their lives. The burrows are also protected by a flap-like door that makes them particularly hard to find.

“Due to a number of life history characteristics, these spiders are difficult to collect and consequently little is known about their biology.”comments Laura Montes de Oca, Instituto de Investigaciones Biológicas Clemente Estable, Uruguay. “Observations in natural conditions let us to know that they are mostly active during night. This knowledge is key to finding the spiders in order to perform the necessary studies, both on field and in laboratory. Remaining in the burrow most of their lives, makes these animals vulnerable to habitat perturbations. In Uruguay the psammophyte vegetation is critically decreasing, so it is very important to study and conserve the species.”

Experiments in laboratory environment reveal some of the secrets that the secluded burrow life of these spiders hide. Chaco costai was observed during hunting, when the spiders lift the entrance of the burrow with their front legs. The flap-like door of the spider den provides a perfect cover to ambush and catch the unsuspecting victim. The spiders return to their burrow after catching the prey. Another occasion when the spiders go in the open is during copulation when both the male and the female leave their hiding places. However, they return to the burrows straight after that.