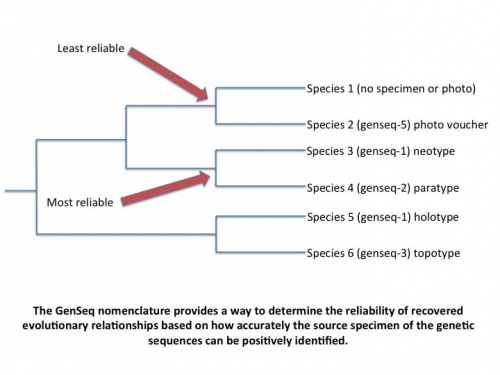 An improved and expanded nomenclature for genetic sequences is introduced that corresponds with a ranking of the reliability of the taxonomic identification of the source specimens. This nomenclature is an advancement of the “Genetypes” naming system, which some have been reluctant to adopt because of the use of the “type” suffix in the terminology. The study was published in the open access journal Zookeys.

The use of genetic sequences has been increasing with each passing year but unfortunately, the separation between voucher specimens and genetic sequences is similarly growing. With increasing frequency, the link between the genetic sequences being used in analyses and the organisms from which they came is not being reported. The taxonomic determination remains solely the responsibility of the submitter of the sequences. Erroneous identifications are difficult to discover, and the perpetuation of the error in subsequent uses of the sequence data is nearly impossible to stop.

To demonstrate use of the new nomenclature, the authors of the study review recently published news species descriptions in the ichthyological literature that include DNA data and apply the GenSeq nomenclature to sequences referenced in those publications.

“Use of the new nomenclature and ranking system will improve integration of molecular phylogenetics and biological taxonomy and enhance the ability of researchers to assess the reliability of sequence data.”explains one of the authors Dr. Prosanta Chakrabarty, Museum of Natural Science, Louisiana State University. “We further encourage authors to update sequence information on databases such as GenBank whenever nomenclatural changes are made.”