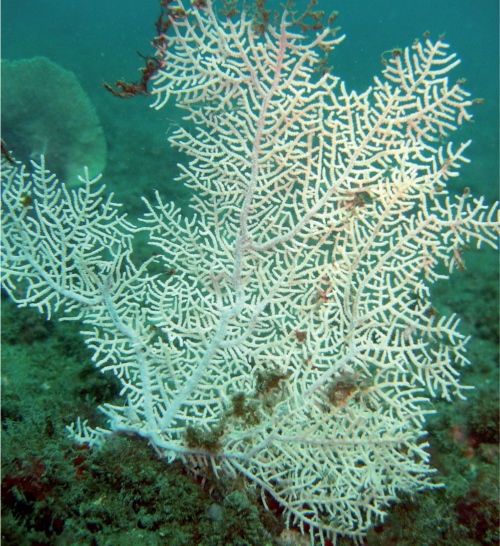 Gorgonians are a type of soft corals easily distinguishable by the complex branching shape, which has also probably inspired their name, coming from the Gorgon Medusa- a creature from the Greek mythology that had hair made of venomous snakes. The existence of Medusa outside myth might be debatable, but gorgonian corals do exist and decorate our ocean with complex patterns and vibrant colors.

A recent study in the open access journal Zookeys reveals two new species of these beautiful soft coral species, discovered in the waters of the Pacific. The two new species belong to the gorgoniid genus Eugorgia, which is exclusively found in the eastern Pacific. It has a wide geographic and bathymetric range of distribution, found from California to Peru and extends down to 65 m deep.

The genus Eugorgia is recognised for their vibrant colored colonies decorating the ocean bottom. The white color has been reported only for one species, Eugorgia alba, but this research adds two more pale representatives within the genus. Both new species E. beebei and E. mutabilis are characterized by pure white color, with the only difference that the latter changes coloration to pale pink and later to a pale gray, when taken out of water.

“These new species increases the number of species in the genus to 15.”, comments Dr. Breedy, Universidad de Costa Rica, “This is an important contribution to the knowledge of the eastern Pacific octocoral biodiversity.”