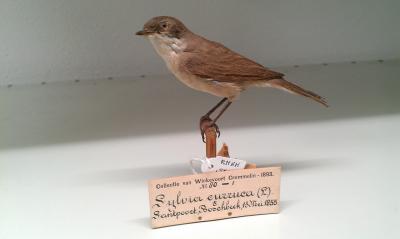 DNA barcoding is used as an effective tool for both the identification of known species and the discovery of new ones. The core idea of DNA barcoding is based on the fact that just a small portion of a single gene already can show that there is less variation between the individuals of one species than between those of several species.

Thus, when comparing two barcode sequences one can establish whether these belong to one single species (viz. when the amount of variation falls within the ‘normal’ range of the taxon under consideration and below a certain threshold level) or possibly to two species (when the amount exceeds this level).

A recent study in the open access journal ZooKeys sequenced 388 individuals of 147 bird species from The Netherlands. 95% of these species were represented by a unique barcode, but with six species of gulls and skuas having at least one shared barcode. This is best explained by these species representing recent radiations with ongoing hybridization. In contrast, one species, the Western Lesser Whitethroat showed deep divergences between individuals, suggesting that they possibly represent two distinct taxa, the Western and the Northeastern Lesser Whitethroat.

Our study adds to a growing body of DNA barcodes that have become available for birds, and shows that a DNA barcoding approach enables to identify known Dutch bird species with a very high resolution. In addition, some species were flagged up for further detailed taxonomic investigation, illustrating that even in ornithologically well-known areas such as the Netherlands, more is to be learned about the birds that are present.

“The barcoding approach is particularly useful in musea.”, comments Dr. Aliabadian, Ferdowsi University of Mashhad, Iran, “This illustrates the value of DNA tissue vouchers ‘ready for use’ from the bird collection of the Naturalis Biodiversity Center in Leiden.”