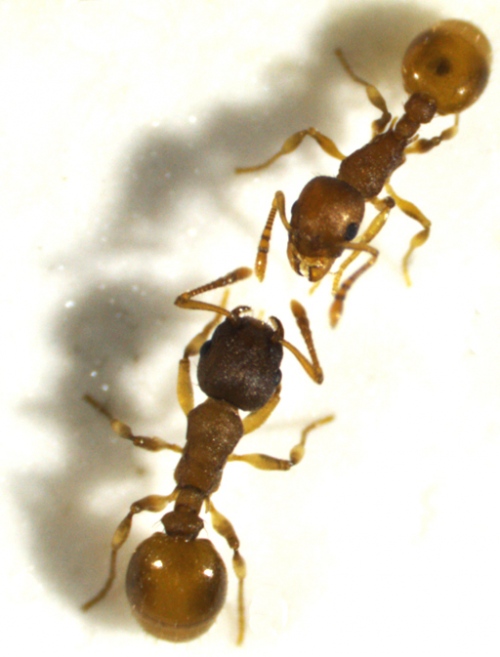 A group of scientists from the University of Mainz and the Senckenberg Museum of Natural History Goerlitz, headed by Susanne Foitzik and Bernhard Seifert, recently described a new slave-making ant species from the eastern USA. They baptized the new ant Temnothorax pilagens – from pilere (Latin): to pluck, plunder or pillage. The paper was published in the open access journal ZooKeys.

In contrast to the famous slave-hunting Amazon Ants whose campaigns may include up to 3000 warriors, the new slave-maker is minimalistic in expense, but most effective in result. The length of a “Pillage Ant” is only two and a half millimeters and the range of action of these slave-hunters restricts to a few square meters of forest floor. Targets of their raiding parties are societies of two related ant species living within hollow nuts or acorns. These homes are castles in the true sense of the word – characterized by thick walls and a single entrance hole of only 1 millimeter in diameter, they cannot be entered by any larger enemy ant.

An average raiding party of the Pillage Ant contains four slave-hunters only, including the scout who had discovered the target. Due to their small size the raiders easily penetrate the slave species home. A complete success of raiding is achieved by a combination of two methods: chemical camouflage and artistic rapier fencing.

The observed behavior is surprising as invasion of alien ants in an ant nest often results in fierce, usually mortal, fighting. Here, however, in several observed raids of the Pillage Ant, the attacked ants did not defend and allowed the robbers to freely carry away broods and even adult ants to integrate them into the slave workforce. The attacked ants did not show aggression and defence because the recognition of the enemy was prevented by specific neutralizing chemical components on the cuticle of the slave-hunters.

The survival of slave ant nests is an ideal solution from the perspective of slave hunters as it provides the chance for further raids during the next years. In other observed raids chemical camouflage was less effective – perhaps because the attacked ant population was strongly imprinted to a more specific blend of surface chemicals. In fact, a defence reaction was more probable if the attacked colony contained a queen that causes a strong imprinting of chemical recognition cues.

If defending, the chance of a slave ant to win a fight with a  Pillage Ant is nearly zero. The attackers use their stinger in a sophisticated way, targeting it is precisely in the tiny spot where the slave ant’s neck is soft-skinned. This stinging causes immediate paralysis and quick death and may result in high rates of casualties ranging from 5% to 100% of the attacked nests’ population, whereas there are no victims among the attackers. If the Pillage Ants can conduct such successful raids with no or minimum own losses, there remains the question which factors regulate their population at a rather low level.