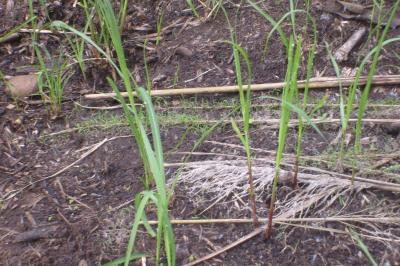 Saccharum spontaneum is an invasive grass that has spread extensively in disturbed areas throughout the Panama Canal watershed, where it has created a fire hazard and inhibited reforestation efforts. The weed originally believed to be originally from India, is perfectly adapted to the conditions in Panama and produces excessive amounts of biomass during the wet season, which impedes reforestation efforts. A new study published in the open access journal NeoBiota proposes an effective method for controlling the growth, based on analysis of its reproductive biology.

Currently physical removal of aboveground biomass is the primary means of controlling the weed, which is largely ineffective and does little to inhibit spread of the species. This is due to the insufficient knowledge about reproduction of the species and this is where science comes to the rescue.

A team of scientists from Australia and Panama provide a detailed examination of a series of studies looking at some of the basic reproductive mechanisms and strategies utilised by S. spontaneum to provide information to support development of better targeted management strategies.

It turns out that S. spontaneum has a very good survival toolkit being able to reproduce through buds on stems that had been dried for up to six weeks. Separate experiments showed that even leftover stem fragments could sprout when left on the surface or buried shallowly and that larger pieces sprouted more readily than smaller pieces.

The study shows that the through better knowledge the panacea of a big problem can turn out to be very simple. A good timing of management actions to prevent flowering would significantly reduce the seed load into the environment and help to prevent spread to new sites. Similarly simple but effective would be cutting stems into smaller pieces allowing them to dry out and reduce the ability of buds to sprout.