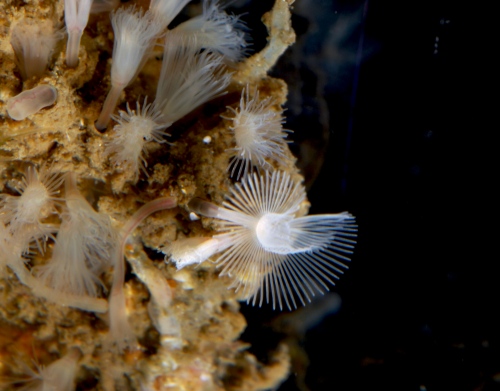 The horseshoe worm is a worm-like marine invertebrate inhabiting both hard and soft substrates such as rock, bivalve shells, and sandy bottom. The name “horseshoe” refers to the U-shaped crown of tentacles which is called “lophophore.” Horseshoe worms comprise a small phylum Phoronida, which contains only ten species decorating the bottom of the oceans.

The new species Phoronis emigi, the eleventh member of the group described in the open access journal ZooKeys, comes after a long 62 year gap of new discoveries in the phylum. It is unique in the number and arrangement of body-wall muscle bundles and the position of the nephridia which is the excretory organ of some invertebrates. The new species is morphologically similar to sand-dwelling species Phoronis psammophila and it is also closely related to Phoronis hippocrepia, which inhabits hard substrate.

The morphology of the topotypes for Phoronis ijimai is also described in this study after 117 years since its original description. The combination of a detailed observation of the internal morphologies and the molecular phylogenetic analyses including the topotypes ensure a synonymy between P. ijimai and the northeastern pacific species Phoronis vancouverensis that has long been disputed.

“It is necessary to use both internal anatomy and molecular data for reveal the global diversity of horseshoe worm. The known phoronid diversity still remains low, with all specimens reported from limited habitats and the localities by the limited reports. Investigations at new localities or habitats may yield additional species in the future.”, explains Dr Masato Hirose, Atmosphere and Ocean Research Institute, The University of Tokyo, Japan.