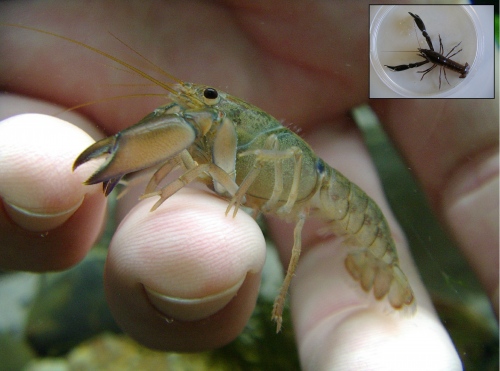 Hidden in one of Australia’s most developed and fastest growing areas lives one of the world’s smallest freshwater crayfish species. Robert B McCormack the Team Leader for the Australian Crayfish Project described the new species belonging to the genus Gramastacus, after 8 years of research in the swamps and creeks of coastal New South Wales, Australia. The study was published in the open access journal ZooKeys.

Being a small crayfish species it has remained undescribed and undiscovered in one of the fastest developing regions of Australia. Only one other species of Gramastacus crayfish is known and it occurs some 900 km away in the Grampians region of Victoria.

This new species is found in lowland ephemeral habitats surrounding coastal lakes and lagoons from Wamberal Lagoon, north along the coastal strip to Wallis Lake. Being dependent on regular natural flooding and drying cycles, only lowland, swampy areas are suitable for this tiny crayfish.

Each crayfish digs a small rounded cross-section burrow up to one metre deep into the water table to survive the drying cycle. Some areas are riddled with these small burrows as they are a very prolific species and can occur in very high numbers in small habitat areas.

The newly described crayfish are found in one of Australia’s most developed regions. Unfortunately, this means that much of their habitat has been lost in the past as these ephemeral areas are the first to be drained or reclaimed to make way for agriculture, industry, housing developments, golf courses, infrastructure, etc. Now, being found and officially described, this crayfish must be considered in any further developments and hopefully future habitat loss will be reduced.

The scattered populations of Gramastacus seem highly fragmented and many are increasingly threatened by a range of risks other than human development. Invasive crayfish, pest fish species like plague minnows and swordtails, rising sea levels and falling water tables all are increasing dangers. Luckily, the large number of National Parks and Reserves along the coastal strip provides safe refuges for some populations.

About the Australian Crayfish Project:

Started in 2005 The Australian Crayfish Project (ACP) is a privately funded project run entirely by volunteers with a thirst for knowledge on freshwater crayfish. We all freely give our time and resources to support the project. Australia has one of the most diverse ranges of freshwater crayfish species on the planet yet there is much confusion with the description and distribution of species and many species remain undiscovered & undescribed. The project is discovering dozens of new species or new populations that were never known to exist. Our aim is to find and identify all species of freshwater crayfish and their habitat, the bottom line is that if no one knows these species are there and they don’t even have a name then how can they be protected and conserved into the future? The results of this project will ensure that all management agencies take the crayfish and their habitat into consideration for future environmental, conservation, development and catchment management plans, etc.

Australia’s unique crayfish are important keystone species which have a disproportionately large effect on the whole catchment relative to their abundance. They play a critical role in maintaining the structure of the whole ecological community, their prosperity and abundance directly affecting the health and abundance of numerous other species (macroinvertebrates, fish, eels, turtles, lizards, snakes, water rats, platypus and birds, to name just a few) in the ecosystem. Please help us help the crayfish and all the other species that rely on them for their survival. http://www.aabio.com.au/the-australian-crayfish-project/

For a full list of all Australian Freshwater Crayfish: