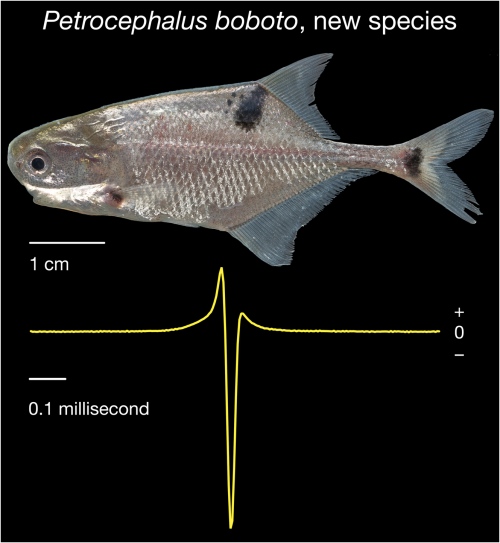 Two new species of weakly electric fishes from the Congo River basin are described in the open access journal ZooKeys. One of them, known from only a single specimen, is named “Petrocephalus boboto.” “Boboto” is the word for peace in the Lingala language, the lingua franca of the Congo River, reflecting the authors’ hope for peace in troubled Central Africa.

On a 2010 field trip to the Congo River of Democratic Republic of the Congo, in the riverside village of Yangambi-Lokélé, French ichthyologist Sébastien Lavoué of the Taiwan Institute of Oceanography and American ichthyologist John Sullivan of Cornell University, both specialists on mormyrid weakly electric fishes, captured a single individual of the genus Petrocephalus not quite like any they had seen before.

“Sébastien has the best eye of anyone in the world for Petrocephalus,” says Sullivan. “So when he wasn’t certain what species it belonged to, we flagged it as one to look at carefully once we got home.”

As they had for hundreds of other Petrocephalus specimens collected in Central Africa since the late 1990s, they placed the small, silvery fish in a small basin with water from the river and recorded its electric organ discharge (EOD) with an oscilloscope, humanely euthanized it, took its photo, procured a tissue sample for DNA analysis, tagged it and preserved it in formaldehyde.

Petrocephalus are African weakly fishes of the family Mormyridae that produce pulses of only a few hundred millivolts from an organ made of modified muscle cells in front of their tail. Receptor cells on the fishes’ skin detect distortions to the electric field created by nearby objects in the water. In this way, they are able to “electrolocate” through their complex aquatic environment at night. Their short electric pulses, too weak to be sensed by touch, are also used to communicate the sender’s species identity and gender to other electric fishes.

When Sullivan and other researchers collect live electric fishes in the field, they routinely make recordings of these EODs, one fish at a time, so that they can later study and compare the signals and the specimens’ anatomy together. Specimens are individually tagged so that after they are preserved and placed in a museum collection, they remain linked to their EOD recordings. “With these electric fishes it is often difficult to determine where the species boundaries are, and we need all the available evidence, from morphology, DNA and their EODs to figure it out.” Sullivan said. In this case, the EOD of this odd Petrocephalus was not so different from EODs of other species in this genus.

Back in his laboratory in Taipei, Lavoué sequenced the gene cytochrome b from the specimen. Comparing this sequence to those from other Petrocephalus specimens and careful examination of the fish’s morphology and its EOD helped him determine that it belonged to an undescribed species. “Describing a new species from a single specimen is far from ideal,” Lavoué said, “but in this case it seemed the best thing to do. In the places we’ve sampled, it’s obviously very rare. Since we haven’t yet found any locality where it’s common, it’s unlikely we’ll find such a locality anytime soon.”

Lavoué and Sullivan named this species “Petrocephalus boboto“: the word “boboto” means peace and fellowship in the Lingala language spoken along the Congo River.

“We named this hard-to-find Petrocephalus species “boboto” in the hopes that solutions for peace—though elusive like this fish—can be found in eastern D.R. Congo and the other troubled areas of Central Africa,” said Sullivan.

The other new Petrocephalus species Lavoué and Sullivan describe in the paper, also from the Congo River basin, is named for their colleague, Matthew Arnegard, another mormyrid researcher currently working at the Fred Hutchinson Cancer Research Center in Seattle, Washington.

The research that led to the discovery of the two new Petrocehpalus species was funded by the National Science Foundation of the United States and a Fulbright scholarship to J. Sullivan.