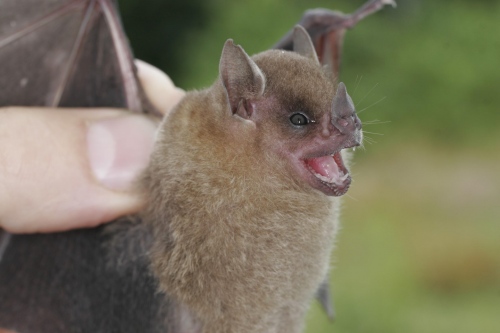 Lying forgotten in museum collections two new species of yellow-shouldered bats have been unearthed by scientists at the American Museum of New York and The Field Museum of Natural History and described in the open access journal ZooKeys. These two new additions to the genus Sturnira are part of a recent discovery of three bats hidden away in collections around the world, the third one still waiting to be officially announced.

Up until recently the genus Sturnira was believed to contain only 14 species. In the last years closer morphological and molecular analysis have revealed an unexpected species richness in the genus. Sturnira now includes 22 described species, making it the most speciose genus in the Neotropical bat family Phyllostomidae.

Phyllostomidae, or the New World leaf-nosed bats are exclusively found in the biodiversity rich tropical areas of Central and South America. Both the scientific and common names of these bats refer to their often large, lance-shaped noseleaves. Because these bats use echolocation to orientate in the darkness the “nose-leaf” is thought to serve some role in fine-tuning their call.

All species in the yellow-shouldered genus Sturnira are frugivorous which means they feed largely on fruit. They are endemic to the Neotropics where they inhabit tropical lowland and montane forests. In fact the greatest diversity in the genus occurs on the elevated forested slopes of the Andes where at least 11 species occur.

The two newly described species, Sturnira bakeri and Sturnira burtonlimi occur in western Ecuador and in Costa Rica and Panama. The reason why they went unrecognized in collections is a superficial resemblance with other species in the genus, most of which were described without adequate illustrations to communicate identifying characteristics. Only after an in-depth molecular analysis that included over 100 samples from most of the species of the genus could the new species be identified. “Modern electronic publications likeZooKeys permit extensive and detailed color photography to accompany taxonomic descriptions. Any reader can easily and clearly appreciate the character states we use to distinguish these new taxa.” said co-author Bruce Patterson.