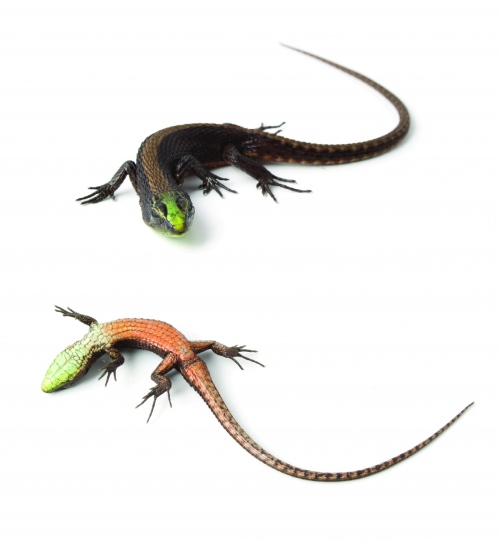 Field and laboratory work by Omar Torres-Carvajal from Museo de Zoología QCAZ, Pontificia Universidad Católica del Ecuador, and his former undergraduate student Simón Lobos has resulted in the discovery of a gem-looking new species of shade lizard from the cloudforests in northwestern Ecuador. This region is part of the 274,597 km2 Tumbes-Chocó-Magdalena hotspot that lies west of the Andes. The study was published in the open access journal ZooKeys.

Shade lizards (genus Alopoglossus) are widely distributed across tropical South America. They differ from most other lizards in having their tongues covered by folds instead of scale-like papillae. Shade lizards are generally brown leaf-litter dwellers that live on both sides of the tropical Andes. The unusually brightly coloured new species described by Torres-Carvajal and Lobos was named Alopoglossus viridiceps and increases to seven the number of species of this group of lizards, six of which live in Ecuador.

Lizards collected as far back as 1977 and deposited in Museo de Zoología QCAZ were examined. The authors were soon surprised with an interesting finding. Some individuals collected during the last five years, mostly at the Santa Lucía Cloud Forest Reserve in northwestern Ecuador, had a metallic greenish head and an orange belly.

Other features like numbers of scales, as well as DNA evidence, indicated that these cloudforest lizards actually belong to a new species. DNA data also suggest that its closest relative is Alopoglossus festae, a species that inhabits the Pacific lowlands of Colombia and Ecuador.

‘Simón Lobos and I have been working on shade lizards since 2010, and we have preliminary data suggesting that the widespread Pacific shade lizard, Alopoglossus festae, might actually represent several species new to science. The same pattern of “hidden diversity” applies to the Amazonian species. Therefore, the diversity of shade lizards has been underestimated. We are presently working on papers to share these discoveries with the scientific community.’ said Dr. Torres-Carvajal.