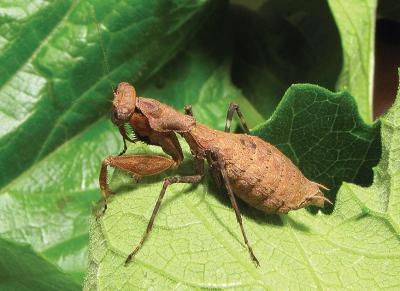 Scientists describe a new species of praying mantis, Dystacta tigrifrutex, or the bush tiger mantis from Rwanda’s mountainous Nyungwe National Park. Like all praying mantises the new species is a vicious hunter. The wingless females are adapted for catching prey close to the ground and in the undergrowth, which inspired the name of the species due to the similarities in hunting practices with one of the world’s favorite big cats. The study was published in the open access journal ZooKeys.

The new species was discovered on a cool and rainy night in a thick montane forest during a survey of the insects in Nyungwe National Park in southwestern Rwanda. The light traps used by the scientists attracted a male specimen of what then seemed as an unknown species of praying mantis, which unlike the female is winged and flew there attracted to the light.

When the scientists reached to the leaf litter they also found the female of what turned out to be the same new species. But the surprises of this lucky find did not finish there.

Soon after the female was placed in captivity, she laid an egg case, called an ootheca, and the researchers were later able to see the emerging nymphs. This lucky string of events allowed scientists to describe in one go the male, female, nymphal stages and a large portion of the biology of the new species which rarely happens in insect biology.

The three-week Rwanda survey turned up a wealth of finds among which the bush tiger mantis was the only new species, but after 8 months of identifying the collected insects the researchers also found a dozen new to Rwanda.

“We knew this mantis was special after completing nearly eight months of work to identify all the specimens found during the three week expedition,” said Riley, who is studying evolutionary biology at Case Western Reserve University. “The new species is amazing because the fairly small female prowls through the underbrush searching for prey while the male flies and appears to live higher in the vegetation.”

“The new praying mantis species was found in the high altitude rain forest region of southwestern Rwanda and probably only lives within Nyungwe National Park, which adds significant justification for protecting the park to ensure species like this can continue to exist,” said Dr. Gavin Svenson, curator of invertebrate zoology at The Cleveland Museum of Natural History and adjunct professor at Case Western Reserve University.

After such a fruitful collaboration the two lead authors Dr. Gavin Svenson, Cleveland Museum of Natural History, Riley Tedrow, Case Western Reserve University, and fellow researchers in Rwanda, they plan to return to Nyungwe in June to survey more mantises where they found the bush tiger and to search several other locations in the park. They hope to return with more new species as well as to learn whether the bush tiger’s habitat is limited or more broadly spread.