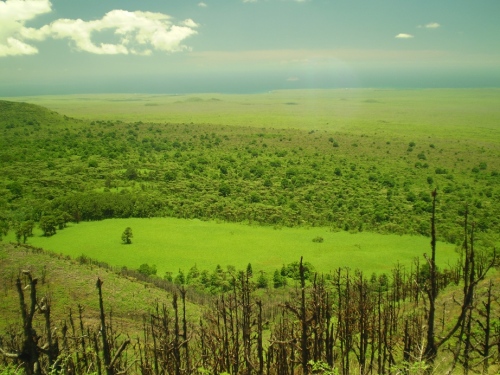 A new study led by a PhD researcher at The University of Western Australia has revealed that parts of the iconic Galapagos Islands have been overrun by invasive plants from other parts of the world.

“People may be shocked that a place considered so iconic for biodiversity is so overrun with weeds in some areas despite ongoing control effort by National Park rangers, but this is really a global story,” lead author from the UWA School of Plant Biology Mandy Trueman said.

The results published in the open access journal Neobiota confirm that in the humid highland part of Santa Cruz Island in the Galapagos National Park, nearly half of the canopy of the vegetation is comprised of non-native trees, shrubs and grasses.

“These invaders compete with native plants for light and water and can change the environment so that both flora and fauna are affected,” Mandy said. “These invasions are one of the factors threatening Galapagos species, many of which occur nowhere else in the world.”

The core outcome from the study is a map and associated database that details the abundance of both introduced and native species over the landscape. This information is of great importance to managers.

The Ministry of Environment through the Galapagos National Park Directorate, within the introduced and invasive species control program has made great efforts to control invasive species and replace them with natives. These efforts have resulted in the recovery of some areas of high ecological value. They annually manage 400 hectares per year for the worst invaders – blackberry, guava and cedrela.

Heinke Jäger, who is based in Galapagos with the Charles Darwin Foundation, explained the importance of knowing where different plant invasions have occurred so that decisions can be made about how to manage them.

“The reality is that humans take plants to new places and that can change the nature of those places forever. Islands are particularly susceptible to these changes,” Heinke said. “Eventually some native species will lose out against the non-native invaders. This is a reality that conservation managers in many parts of the world need to deal with.”

“It was a real privilege to spend all that time walking in the highlands in the company of giant tortoises, getting to know the Galapagos plants,” Mandy said. “There are still a lot of native species present, and I hope this study can help managers decide where to take action to protect our precious native flora and fauna.”