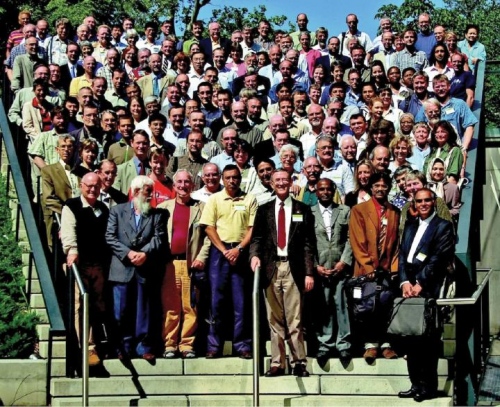 The five-day discussions and decisions of the Nomenclature Section of the XVII International Botanical Congress took place in Vienna, Austria in July 2005. This meeting was held in association with the International Botanical Congress, which takes place every six years and is where the world’s premier experts on the rules for naming plants, fungi and algae get together to debate and update the rule book for naming the organisms they study.

The primary product of the meeting, theInternational Code of Botanical Nomenclature, or “Vienna Code”, was published in 2006. Another other important product is the official report for the historical record, which has just been published as an open-access forum paper in PhytoKeys.

The Nomenclature meeting in Vienna was attended by 198 delegates. This particular meeting was fairly conservative in comparison with those at some earlier International Botanical Congresses. Relatively few changes to the International Code of Botanical Nomenclature were accepted, but a small number of significant changes and many useful clarifications and improvements were adopted.

Perhaps the most important decision regarded the publication status of theses submitted for a higher degree from 1953 onward. These would no longer be considered as effectively published for nomenclatural purposes unless a statement to that effect or other evidence was included. Three important sets of changes applying to the naming of fossils and fungi were also accepted.

The inclusion of a Glossary in the Code for the first time was a notable achievement. It was very closely linked to the wording of the Code, and only nomenclatural terms defined in the Code were included. The new Glossary was initiated by Paul C. Silva (1922-2014), a specialist in algae and long-serving member of the Editorial Committee of the Code.