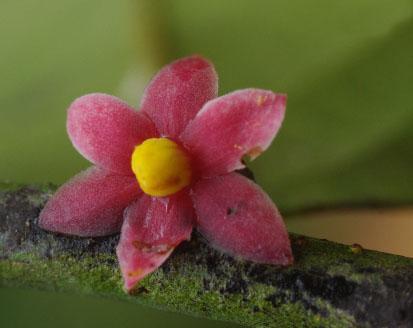 A new genus and species of flowering plants from the custard apple family, Annonaceae, has been discovered in the jungles of Gabon by French and Gabonese botanists. The extraordinary genus was named Sirdavidia, after Sir David Attenborough to honour his influence on the life and careers of the scientists who discovered it. The study was published in the open access journalPhytoKeys.

But what is so special about this new discovery? The new genus was in fact erected to accommodate an unusual new species, found in Monts de Cristal National Park, Gabon during an expedition focusing on the study of Magnoliidae floral diversity in rain forests, to which the Annonaceae family belongs.

It was a great surprise for the researchers to discover an unusual Annonaceae plant not only in one of the botanically best known areas in Gabon, but also very close to a main road. Perhaps its rarity was the reason why no one had stumbled upon it before. Despite the careful study of the area the new species Sirdavidia solannona was only present in two localities, which also led to this species being preliminarily classified as Endangered.

“This new discovery underlines once again the importance of the Gabonese national parks for conserving the wonderful yet incompletely known biodiversity for the country and Africa.” indicates Raoul Niangadouma, senior botanist at the Herbier National du Gabon, Libreville.

“The last thing on my mind when starting this expedition was to discover a new species, let alone a new genus!” indicates Dr. Hervé Sauquet, senior author and Associate Professor atUniversité Paris-Sud. “We aimed for well-known regions in Gabon because we wanted to be sure to find the necessary flowers for our project”.

With its unusual flower structure characterised by red petals contrasting with its bright yellow loosely arranged stamens, the flowers of this newly discovered small tree did not quite fit any of the previously described genera.

DNA sequence analyses led by Dr. Bonaventure Sonké, Professor at the Université de Yaoundé I in Cameroon, proved the authors right – the newly discovered plant required the erection of a completely new genus to accommodate it. But what struck the scientists even more was that the closest relative of Sirdavidia was to be found some 3000 km away in an isolated forest in Tanzania.

“It is funny that the new genus is a close relative to Mwasumbia, endemic to Tanzania, a genus I also described a few years ago,” explains the lead author Dr. Thomas Couvreur, Researcher at Institut de Recherche pour le Développement, France, currently based in Yaoundé, Cameroon. “When I saw the results of the DNA analysis confirming its position I thought someone was pulling my leg. Discovering two new genera on opposite sides of Africa and they turn out to be closely related!”

The authors of the study decided to commemorate this once-in-a-lifetime discovery, by naming the new genus after Sir David Attenborough. Sirdavidia is in fact the first plant genus named after him, although several plant species already bear his name.

“Sir David Attenborough has been such a wonderful and important influence in my life and the life of so many,” comments Dr. Couvreur. “I was really surprised when I realised that no one has named a genus after him before, so I found this discovery an excellent opportunity to honor him with a genus name.”

“I show David Attenborough’s The Private Life of Plants BBC series every year to my students” adds Dr. Sauquet. “This will be a nice story to tell them. David Attenborough’s legacy is exactly about that: stimulating passion and interest about the natural world around us.”

Sir David was “truly thrilled” when hearing about this new genus: “I know very well that such a decision is the greatest compliment that a biologist can pay to another and I am truly grateful,” he indicated.

But the wonders of the new discovery did not stop here for the team. Curiously the flowers ofSirdavidia solannona are probably “buzz pollinated”, a very specific type of pollination whereby bees use the vibration of their wings to extract the pollen grains onto their bellies. The flowers of Sirdavidia have a striking resemblance with those of the nightshade or Solanaceae family – champions of buzz pollination. This resemblance with Solanaceae inspired the name of the new species.

“What is really special about this is that buzz pollination is unknown in Magnoliideae and early divergent angiosperms in general, which represent around 10,000 species worldwide.” add Drs. Couvreur and Sauquet. “If confirmed by our further studies, this will prove to be another very exciting aspect of this discovery!”

A “species page information” on this new species can be found at the World Annonaceae Scratchpad.