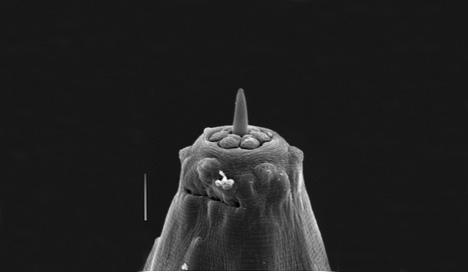 Discovered forty years ago, the two roundworm species, A. isokaryoni and P. paradoxus, are yet to be studied in detail. To obtain new information on the worms’ morphology and taxonomic position, a research team from Bulgaria were the first to implement scanning electron microscopy (SEM) to study these nematodes. The research was published in the open access journal ZooKeys.

Through their initiative, the scientists also concluded that the Pararhyssocolpus genus can be considered endemic to the Maritime Antarctic.

So far has been known that the two worm species are widespread in the Antarctic Islands and they live in different microhabitats, having various diet. Nevertheless, all data has been derived from light microscopy analysis and therefore, it has been insufficient.

The new SEM pictures revealed curious peculiarities of lip region and spear, shape of vulva and other external characters. Along with new data about the worms’ postembryonic development and the evidences produced by molecular analyses, the micrographs helped in solving the taxonomic problems around these remarkable species.

Roundworms are the most diverse and numerous representatives of high-latitude invertebrate fauna in Antarctica. Very well adapted to its severe climate conditions, they are even called glacial survivors. However, there is still the need for further studies on the nematode diversity in these overwhelming habitats, the research team pointed out.

This study was partly funded by project ANIDIV2, Bulgarian Academy of Sciences and several previous projects supported by the National Scientific Fund.