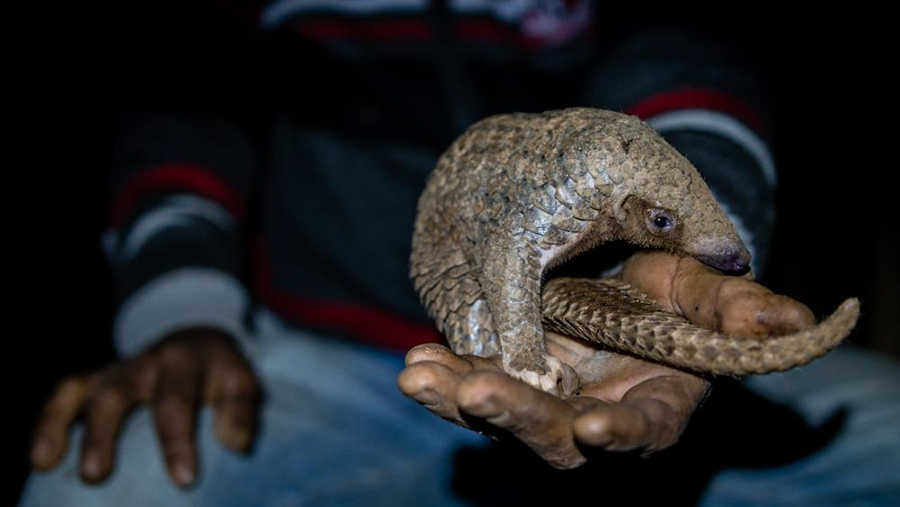 Alarming footage captured by World Animal Protection and the Wildlife Conservation Research Unit (WildCRU) at University of Oxford reveals the heart-breaking moment a pangolin is brutally killed for its body parts to be sold on the black market in Assam, north-eastern India.

The footage was captured by an undercover researcher on their mobile phone, and shows a terrified pangolin hiding from hunters in a hollowed-out tree clinging for life, as its tail is tugged. The hunters use axes to cut the tree, but failing to remove the desperate animal, they light a fire to smoke it out. As the pangolin starts to suffocate and lose consciousness it makes a bolt for freedom but is captured, bagged and taken to a hut where the next stage of the ordeal takes place. The pangolin is repeatedly bludgeoned with a machete until it can barely move. While bleeding, it is then thrown into a cauldron of boiling water possibly still alive, where its tragic struggle comes to an end.

Pangolins are often referred to as the world’s most trafficked mammal and this footage demonstrates the huge cruelty the animals endure when hunted. The harrowing clip is part of a two-year study, conducted by researchers from World Animal Protection and the University of Oxford, into traditional hunting practices in the state of Assam, that borders Bhutan. The study is published in the open-access journal Nature Conservation.

Interviews conducted by researchers with over 140 local hunters found that pangolins were largely targeted for their scales that are sold for a premium, with hunters earning the equivalent of four months’ average salary for a single pangolin. The hunters from these communities were clearly unaware of the part they are playing in the international trafficking trade. Yet the illegal traders that then sell the animal products across the borders on the black market go on to make a large profit.

Pangolin scales are used in traditional Asian medicine particularly in China and Vietnam. They are made of keratin, the same material that makes human fingernails and hair, and they have no proven medicinal value. Pangolin meat is also considered to be a delicacy in some countries, and the scales are also used as decorations for rituals and jewellery. They are considered to be at high risk of extinction primarily as a result of illegal poaching.

“Suffocated with smoke, beaten and boiled alive – this is a terrifying ordeal and pangolins clearly suffer immensely.

“This footage shines a spotlight on how truly shocking the practice of hunting pangolins truly is. Not only is this a major conservation issue – it’s a devastating animal welfare concern. If we want to protect pangolins from pain and suffering in the countries they come from, we need to tackle the illegal poaching trade”

“Increasing demand driven by traditional Asian medicine is making pangolins a lucrative catch. It’s easy to see why they are being commercially exploited, as scales from just one pangolin can offer a life changing sum of money for people in these communities, but it’s in no way sustainable. Wild pangolin numbers are beginning to plummet.”

Reliable estimates of how many pangolins remain in the wild are lacking, although it is thought that over a million individual pangolins were taken from the wild between 2000, and 2013. There are eight species of pangolin, all of which are considered threatened with extinction on the IUCN Red List of Threatened Species.

World Animal Protection works tirelessly to prevent cruelty to animals around the world. Although it is well documented that pangolins are being hunted and trafficked, until now, the immense suffering and cruelty that these animals endure when they are hunted has remained relatively overlooked.

To combat the global trade in their bodies and scales, and to protect pangolins from the unimaginable suffering they endure World Animal Protection is calling for: