In fact, the cause for celebration is two-fold: this year, it’s also the 10th anniversary of ZooKeys’ very special 50th issue, which marked a new era for biodiversity data publishing by introducing several innovative workflows and tools. This is when ZooKeys became an example to follow globally: a title the journal still takes pride to be holding to this day.

Today, we shall reminisce about everything along the way: from that sunny Californian morning at the Entomological Society of America meeting in 2007, where the idea about a new-age taxonomic journal in zoology sprang up in a breakfast chat between renowned entomologists and future founders of ZooKeys: Prof Lyubomir Penev and Dr Terry Erwin, to this very moment, where we’re counting over 5,500 published articles, authored by more than 8,000 researchers from 144 countries and comprising ~150,000 pages. Thus, we saw the description of one supertribe, seven tribes, five subtribes, 27 families, over 800 genera and more than 12,000 species previously unknown to science. In this journey, ZooKeys climbed up the ladder of academic rigour and trustability to become today’s most prolific open-access journal of zoology.

Even though today is the time to feel exalted and look back on our achievements and conquered milestones with ear-to-ear smiles, it is with heavy hearts that we’ll be raising our glasses tonight, as we won’t be joined by our beloved friend and founding Editor-in-Chief, Dr Terry Erwin, whom we lost on 11th May 2020. While his place in our hearts and ZooKeys’ Editorial board will never be filled, we accept our duty to help for his legacy to persist for the future generations of scientists by taking a vow to never lower our standards or cease to improve our services and care for our readers, authors, reviewers and editors alike.

In honour of Terry, who will be remembered for his splendid personality and zealous enthusiasm for carabid beetles and the world’s immense biodiversity, we’ve opened up a special memorial volume to be published on 11th May 2021.

In fact, we have thousands of people to thank for the place ZooKeys is at right now: these are our authors, who have trusted us with their research work time and time again; our reviewers and editors, who have taken their invaluable time to promptly process submitted manuscripts; and, of course, our readers, who are using ZooKeys content to expand the world’s knowledge, either by learning and building on the findings in their own research, or by spreading the knowledge to those who will.

With a thought for our authors & readers

We’ve been striving to implement the latest and most convenient scholarly publishing technologies and innovations, and also develop some of our own to make sure that ZooKeys users enjoy their experience with our flagship journal.

In hindsight, ZooKeys was the first journal to pioneer a lot of scholarly publishing technologies, which back in the time were quite revolutionary. Notable examples from 2008-2016 include:

Yet, this was only the beginning. Fast forward to December 2020, we’re working even harder to build up on our achievements and evolve, so that we stay on top of our game and the scholarly publishing scene. Here are the key innovations we recently implemented in ZooKeys:

With a thought for our editors

Besides revolutionising research publishing, at Pensoft, we’re also deeply devoted to facilitating our editors in their day-to-day editorial work, as well as their long-term engagement with the journal and its progress.

Recently, we expanded journal performance reporting services, in order to keep our editors on track with the most recent trends in their journal’s performance. Meanwhile, we’ve also taken care after the continuous improvement in those stats by implementing several features meant to facilitate and expedite the handling of manuscripts.

Follow ARPHA’s blog to keep up with the new features available to users of Pensoft’s journals and all journals hosted on ARPHA Platform.

With a thought for the community

Naturally, research outputs are only as valuable to publish as they are valuable to the community: within and beyond academia. Ultimately, their merit is best measured by citations and readership. This is why, we shall now have a look back at the most impactful papers published in ZooKeys to date.

Thanks to the indexation of ZooKeys in the research citation database of Dimensions, following the collaboration between ARPHA and Digital Science, which started in 2018, we’re now able to explore the all-time most cited publications in our flagship journal. Detailed information and links to the papers where each of those studies has been cited is available on the webpage of the article. 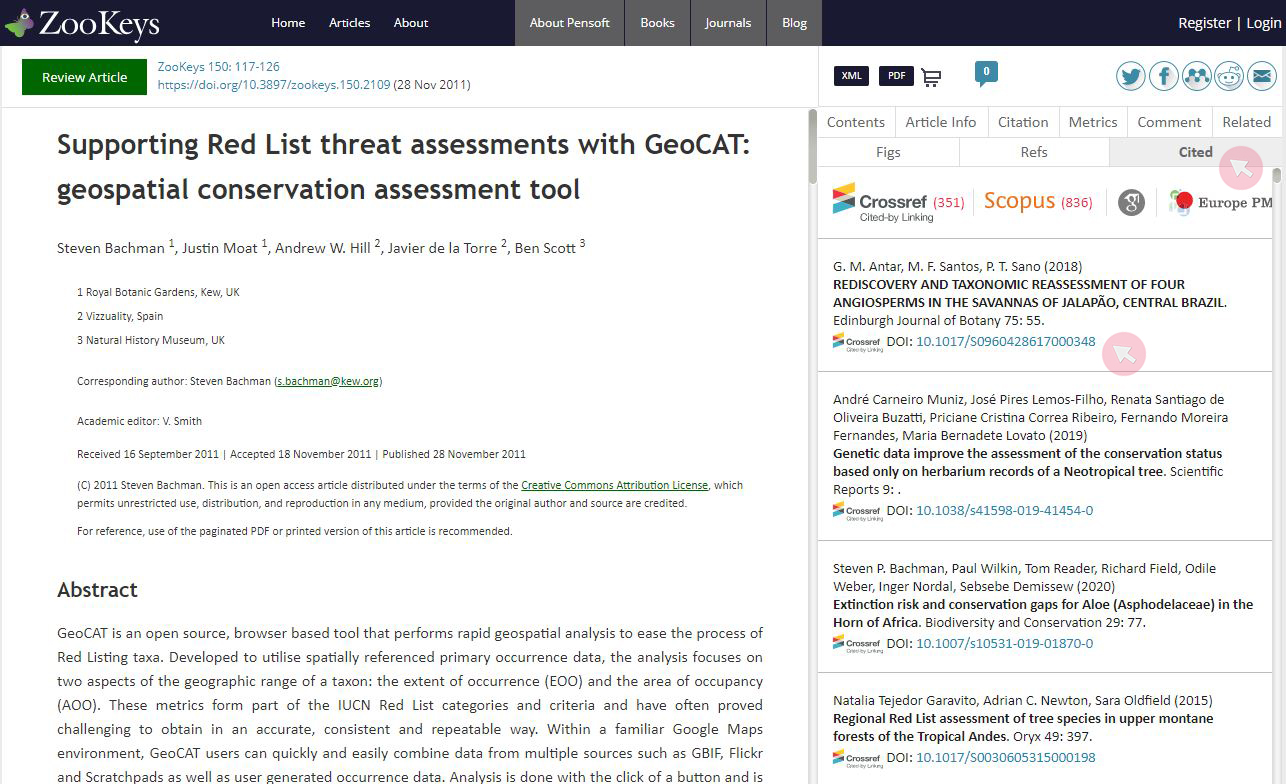 Thanks to ARPHA Platform’s all-roundedness and transparency, we get to explore the most read papers ever published in ZooKeys straight from the Articles section on the journal’s website.

In 2013, ZooKeys had the honour to announce the first carnivore found in the Western Hemisphere in over three decades. Further, that wasn’t ANY carnivore, but the olinguito, which National Geographic rightfully called a “fuzzy fog-dweller with a face like a teddy bear”.

A year prior to the description of the olinguito, a brand new family of “cave robbing” spiders emerged from the pages of ZooKeys, after US scientists found a previously unknown to science spider with “unique, toothed claws at the end of each leg” in Oregon.

A huge, first-of-its-kind catalogue containing data on all family-group names for all known extant and fossil beetles (order Coleoptera) was published in ZooKeys in an exemplary research collaboration, spanning three continents in 2011.

In a truly world-wide sensation, a new species of tiny moth inhabiting a narrow stretch of extremely fragile habitat running between the USA and Mexico, was named after then President-elect Donald Trump in a desperate call to protect this and other similarly vulnerable ecosystems in North America. The species currently goes by the name Neopalpa donaldtrumpi.

In 2016, US scientists described a total of 14 new to science tarantula species from what many would think to be one the best-researched countries: the United States of America. Curiously enough, one of those tarantula species, found in California near Folsom Prison – a place best known from Cash’s song “Folsom Prison Blues”, was aptly named Aphonopelma johnnycashi.

As visionaries, we’ve long realised that scientific impact goes beyond citations and journal subscribers. Communicating science to the community beyond academia is, in fact, one of the strongest components in research dissemination, as it lets the laypeople make sense of the wider world and where exactly they stand in the bigger picture. This is why we’ve been putting that special extra effort to promote research published in our journals–including ZooKeys–using press releases, blog posts and social media content (follow ZooKeys on Twitter and Facebook).

Thanks to our partnership with Altmetric, we’re able to identify the top five most popular papers from ZooKeys for all times. These are the ones that have sparkled the most online discussions via social media, big news headlines, blog posts, Wikipedia and more.

Not only was the previously undescribed species of moth subject to a serious threat of extinction, having been exclusively known from a fragmented area along the Mexico–United States border, but the insect’s “hairstyle” was pointed out to bear a striking resemblance to the golden locks of the 45th U.S. President Donald Trump.

Published in ZooKeys earlier this year, this extensive geology and paleontology monograph presents an unprecedented in its volume and scientific value account of a large portion of the most important prehistoric vertebrate fossils ever unearthed from the famous Kem Kem beds in Morocco. “A monograph larger than Paralititan,” as a Reddit user justly pointed out.

On top of taking pride in becoming the discoverer of as many as 14 tarantula species living “right under our noses” in the US, Dr Chris Hamilton enjoyed the spotlight of Live television in his appearance on Sky News. So did a lucky specimen of the newly described species: Aphonopelma johnnycashi! Suffice it to say, the tarantula was named after the legendary American singer-songwriter for all the right reasons.

Apparently, ants that rip their bodies apart in a self-sacrificial attempt to save their colonies from enemies, weren’t something new by the time PhD student Alice Laciny and her team described the new to science species Colobopsis explodens from Brunei. However, the study published in ZooKeys in 2018 was the first to conduct and film experiments on the peculiar exploding behaviour. Although not the very first for science, C. explodens was the first “T-ant-T” species to be described since 1935.

Today, coyotes live all around North America: from Alaska to Panama, California to Maine. Once upon a time, or rather, between the Holocene and the early 1900s, their range used to be restricted to the arid west of North America. So, how did the coyotes turn up at the doorstep of South America? North Carolina scientists reached to natural history collections to map the historic colonisation of the coyotes all the way to our days.

In our final remarks on this special occasion, it’s the time to say a special Thank you! to our most prolific authors:

As well as to our most active reviewers:

And ZooKeys’ most active editors:

Looking forward to sharing with you our next milestones and celebrations!