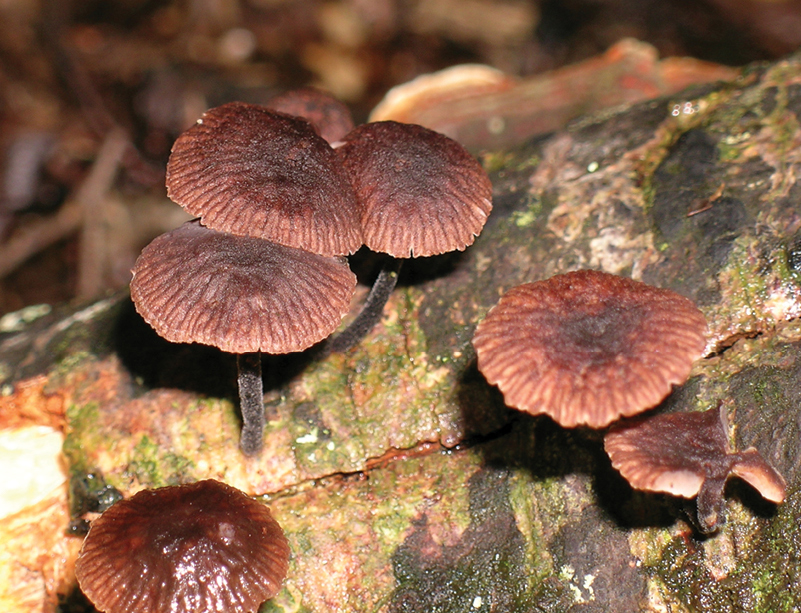 With the help of phylogenetic analysis, scientists describe three new fungus species from New Zealand. The new species belong to the widespread genus Gymnopus, part of the Omphalotaceae family, the most famous representative of which is the favorite of many Shiitake mushroom. The study was published in the open access journal Mycokeys.

Gymnopus imbricatus, G. ceraceicola and G. hakaroa can be recognized by their strong, unpleasant odor when crushed. The smell produced by these species is most commonly described as rotting cabbage or garlic. The species grow in colonies of just a few up to an impressive display of hundreds of fruitbodies on dead tree trunks or on the lower trunk parts of still living trees. Another characteristic is the presence of a waxy layer from which the fruitbodies emerge, which is usually colored in green due to the algae commonly living in the substance.

The species are described as part of an on-going study on the common larger fungi of New Zealand. To date, and across all fungal groups, there are around 8,000 species of fungi known in New Zealand, of which around 2,000 are indigenous and the remainder introduced in recent times. However, the figure for indigenous species represents perhaps 20% of the total, with the remainder undescribed. In addition, some of the names applied to New Zealand fungi in earlier periods are incorrect uses of names applied to northern hemisphere species, and the New Zealand fungi are different and indigenous species.