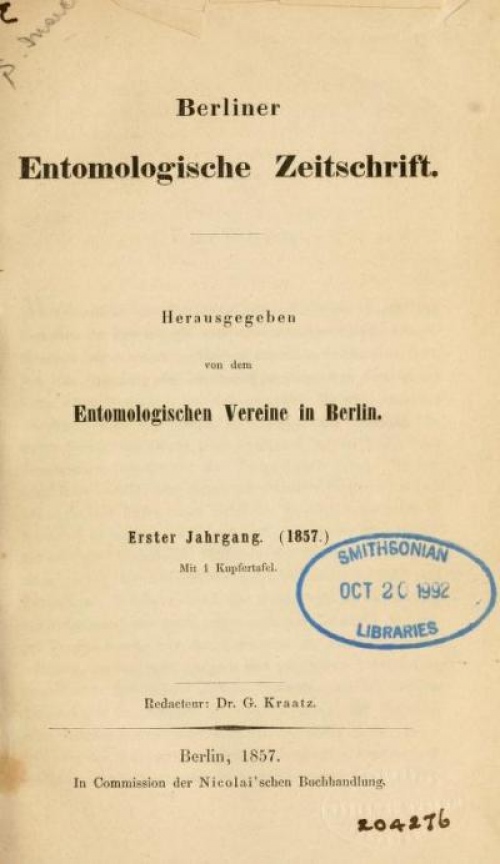 Enough has been written and said about “platinum” open access as a step beyond the “green” and “gold” open access models. However, comparatively little has been seen of its practical implementation. On 1 January 2014, two of the oldest German journals in Zoology – Deutsche Entomologische Zeitschrift and Zoosystematics and Evolution – make a step right into the future by joining the journal publishing platform of Pensoft Publishers and adopting “platinum” open access.

For Pensoft, “platinum” open access means not just that the articles and all associated materials are free to download and that there are no author-side fees but even more so that novel approaches are used in the dissemination and reuse of published content. This publishing model includes:

Zoosystematics and Evolution, formerly Mitteilungen aus dem Museum für Naturkunde in Berlin, Zoologische Reihe – is an international, peer-reviewed life science journal devoted to whole-organism biology, that also has a rich history behind itself (established in 1898). It publishes original research and review articles in the field of zoosystematics, evolution, morphology, development and biogeography at all taxonomic levels.

“Innovation is central to how Pensoft sees its role as a publisher. We want to make our articles as widely available and harvestable as possible both for the research community and the wider public. The attractive combination between historical legacy and tradition, advanced publishing technologies of Pensoft and free and open publishing models will ensure for these two authoritative journals a jump right into the future!” said the Managing Director of Pensoft Publishers, Prof. Lyubomir Penev.

“Making published data automatically harvestable by aggregators like the Global Biodiversity Information Facility or the Encyclopedia of Life is the only effective way how such databases can be increased and re-used to generate new knowledge. The Museum für Naturkunde is the first museum transferring its journals to the path of Pensoft Publishers and adapting them to such modern demands. I am excitedly looking forward to leading the Deutsche Entomologische Zeitschrift on this way.” said the new Editor-in-Chief of the Deutsche Entomologische Zeitschrift, Dominique Zimmermann from the Natural History Museum in Vienna.

Museum für Naturkunde – Leibniz Institute for Research on Evolution and Biodiversity is a research museum within the Leibniz Association. It is one of the most significant research institutions worldwide in biological and geo-scientific research on evolution and biodiversity. Established in 1810, its collections comprise more than 30 million items relating to zoology, palaeontology, geology and mineralogy, which are highly significant for science as well as for the history of science and at the centre of the research performed at the Museum.

Pensoft Publishers specialize in academic and professional book and journal publishing, mostly in the field of biodiversity science and natural history. In 2008, Pensoft launched its first open-access journals named ZooKeys and BioRisk, and since then then it has taken a leadership in introducing innovations in the field of open access. On 16th of September 2013, Pensoft launched the Biodiversity Data Journal (BDJ) and the associated Pensoft Writing Tool (PWT), as the first workflow ever to put together article authoring, community peer-review, publishing and dissemination within a single online collaborative platform.