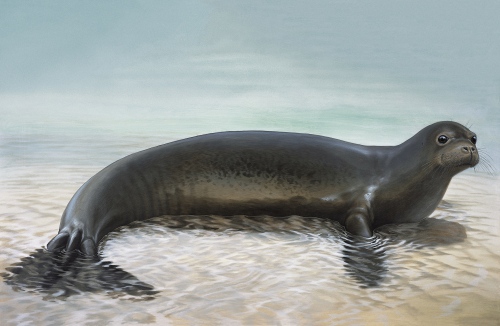 The recently extinct Caribbean monk seal (Monachus tropicalis) was one of three species of monk seal in the world. Its relationship to the Mediterranean and Hawaiian monk seals, both living but endangered, has never been fully understood. Through DNA analysis and skull comparisons, however, Smithsonian scientists and colleagues have now clarified the Caribbean species’ place on the seal family tree and created a completely new genus. The team’s findings are published in the scientific journal ZooKeys.

First reported by Columbus in 1494, the Caribbean monk seal ranged throughout the Caribbean with an estimated population in the hundreds of thousands. Unrestricted hunting in the 19th century, however, caused a rapid decline in numbers. The last definite sighting of a Caribbean monk seal was in 1952, making it the most recent extinction of a marine mammal in the Western Hemisphere.

To find the answers about the classification of the Caribbean monk seal, the scientists turned to DNA extracted from century-old monk seal skins in the Smithsonian’s collections. For the DNA comparisons, the Smithsonian team worked with scientists at the Leibniz Institute of Zoo and Wildlife Research in Germany and Fordham University in New York. Their analyses showed that the Caribbean species was more closely related to the Hawaiian rather than the Mediterranean monk seal. It also showed that Caribbean and Hawaiian monk seals split into distinct species around 3 to 4 million years ago―the same time the Panamanian Isthmus closed off the connection between the Atlantic and Pacific Oceans, which would have naturally separated the two.

“Scientists have long understood that monk seals are very special animals,” said Kristofer Helgen, curator of mammals at Smithsonian’s National Museum of Natural History. “This study is exciting because it gives us a clearer view of their evolution and provides us with new context that highlights the importance of conserving these remarkable and endangered seals.”

The team’s analysis determined that the molecular and morphological differences between the Mediterranean species and the two New World species (Caribbean and Hawaiian) were profound. This led them to classify the Caribbean and Hawaiian monk seals in a newly named genus, Neomonachus. This remarkable discovery is the first time in more than 140 years that a new genus has been recognized amongst modern pinnipeds (seals, sea lions, and walruses).

“We occasionally identify new species of larger mammals, like the olinguito we announced last year,” said Graham Slater, co-author and Peter Buck Post Doctoral Fellow at the Smithsonian. “But to be able to name a new genus, and a seal genus at that, is incredibly rare and a great honor.”

Monk seals, as a group, are unusual among seals in being adapted for life in warm water. With the Caribbean species now extinct, the Hawaiian monk seal is the last surviving species of the genus Neomonachus, as the Mediterranean species is in its genus, Monachus. Both species are listed as “critically endangered” by the International Union for Conservation of Nature. With about 1,200 Hawaiian but less than 600 Mediterranean monk seals left, they are some of the rarest mammals on Earth.