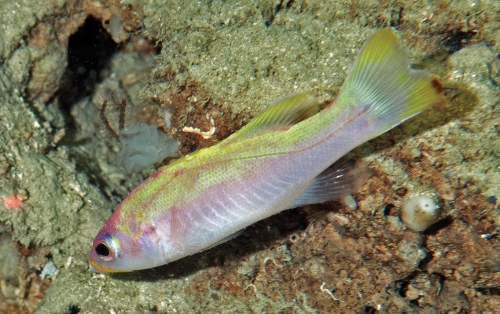 Smithsonian scientists describe a colorful new species of small coral reef sea bass from depths of 182–241 m off Curaçao, southern Caribbean. With predominantly yellow body and fins, the new species, Liopropoma santi, closely resembles the other two “golden basses” found together with it at Curaçao: L. aberrans and L. olneyi.

The scientists originally thought there was a single species of golden bass on deep reefs off Curaçao, but DNA data, distinct color patterns, and morphology revealed three. The study describing one of those, L. santi—the deepest known species of Liopropoma in the Atlantic Ocean, was published in the open access journal ZooKeys.

Dr. Carole C. Baldwin and Dr. D. Ross Robertson, who discovered the new species, propose the common name “spot-tail golden bass” to distinguish it from the other golden bass species, referencing the dark spot on the lower part of the tail fin. It appears to be more closely related to the other new deep-reef golden bass from Curaçao, Liopropoma olneyi, and members of a related genus, Bathyanthias, than to species of Liopropoma such as the candy and peppermint basses inhabiting shallower reefs.

“With Bathyanthias falling out within the western Atlantic Liopropoma clade,” notes Baldwin, “further study of the classification of this group is needed.” The researchers also note that related groups of Liopropoma species have different depth distributions, suggesting that depth may have played a role in their evolution.

To collect deep-reef fish specimens, the scientists are diving to 300 m off Curaçao using a manned submersible, the Curasub. “This underexplored zone between 60 and 300 m in the tropical southern Caribbean is revealing extraordinary biodiversity, including a wealth of new species of beautifully colored fishes,” says Baldwin. “It’s a zone that science has largely missed because it’s too deep to access using scuba gear, and deep-diving submersibles rarely stop at such shallow depths.”

As part of the Smithsonian Institution’s Deep Reef Observation Project (DROP), Smithsonian scientists are working to improve our knowledge of Caribbean deep-reef biodiversity.